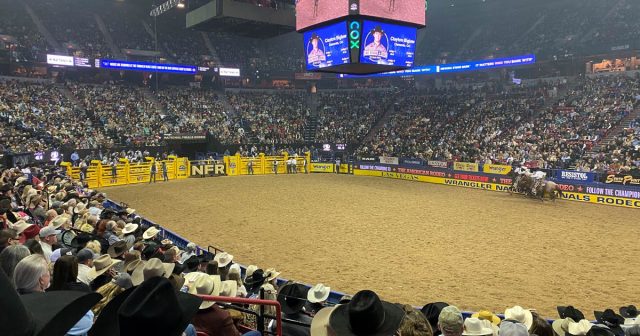 Over the last 10 days, we caught a glimpse of what Las Vegas used to be, as cowboys from across the country poured into Las Vegas for the National Finals Rodeo. While state officials attempted to intimidate the visitors, sending out OSHA officials and compliance teams in an attempt to scare NFR into following the mask mandates, NFR folks were having no part of the mass hysteria and the insane masked sideshow.

The signs were everywhere, it seemed like every couple of feet you were hit with the state-approved propaganda, demanding people to put on their masks, and informing them of “how to eat and drink with masks”.

OSHA and county officials threatened vendors at Cowboy Christmas and the Western Gift show at the South Point. Nevada Department of Business and Industry spokesperson Teri Williams said the state is it is looking into referrals it received regarding a lack of masking compliance at the National Finals Rodeo companion Western-themed gift shows.

Sisolak on Tuesday seemed to acknowledge that he had lost control, slamming maskless cowboys saying, “We’ve lost some common decency and civility as a result of the pandemic.” The governor said he would speak with officials in his office about masking compliance and what to do about NFR.

But even a screaming lunatic, who was literally physically grabbing people who openly defied the mask mandate and refused to take one of her compliance masks at Cowboy Christmas, couldn’t stop the rest of the world from ignoring the idiotic bullshit that Nevada officials are trying to push on the complaint population of Nevada.

Some highlights from the last night of the National Finals Rodeo in Las Vegas, & a thank you to the freedom loving NFR folks who told Sisolak, MGM, Clark County & the Nevada democrats to shove their mandates!

Now if only Nevadans would grow a pair and exhibit the same courage! pic.twitter.com/2S41jpNXzx

See what happens when people say screw the mandates??? These tyrants have zero power once you stand up and fight back! #saynotomandates pic.twitter.com/Xqa9TecNyW

It’s to bad we have to get cowboys from out of town to help take our freedom back, but maybe Las Vegas locals will now wake the hell up and stop cowering behind the cloth! You have the power to stop the madness!!! pic.twitter.com/63ORC3gR3K

Battle Born, or submissive wimps? It’s Time to Stand Up and Take Our State Back!

It’s sad that we need a group of cowboys to come to town to teach the so-called “Battle Born” state how to take back their freedom, but up until NFR came back to Las Vegas, it seemed like 99% of the state’s population was okay giving up their freedoms in order to not to get yelled at by a minimum wage greeter at Walmart.

It’s really not that scary folks.

Every time you walk into a store with that useless mask, you are showing your kids that it’s okay to bow down to tyrants. You are telling them that the Freedoms so many generations fought for mean nothing. You are turning them into complaint wimps!

There are only five states with indoor mask mandates, no matter vaccination status, and Nevada is one of them. We’ve allowed a fat, POS Telemarketer who made millions of dollars exploiting the October 1st shootings to kill our economy to help enrich his friends, chase out countless shows and conventions, and turn the Las Vegas Strip into a crime-ridden third-world style hellhole.

In the lead up to NFR, we had a murder inside the Rio, a shooting inside Bally’s, a housekeeper killed at Bally’s, a man beaten almost to death for not wearing a mask inside a Las Vegas store, and countless assaults inside Casinos and throughout Las Vegas.

Metro is no longer anywhere to be found on Fremont or the Strip. Murders & violence out of control….but Lombardo sends saturation patrols to intimidate cowboys at T-Mobile?

I guess intimidating people into wearing masks is more important than murders & shooting inside casinos? pic.twitter.com/WvRIt4Kwqn

Our City is being ripped apart and tourists are not going to keep coming back!

While it was great having NFR back in town, once their contract is up it’s highly unlikely that they are going to stay in a state that treats them so badly. About half of the regulars didn’t even bother to come this year, saying the mask mandate, crime, and the democratic politics that have poisoned our state were the main reasons for staying home.

From having to step over homeless drug addicts who now line the Las Vegas Strip Corridor, to not being able to find a meal after 10 PM because the Las Vegas Strip now seems to have a default curfew – oh sure, some of the bars and lounges are still open, but the 24-hour restaurants of the past are long gone and forgotten as countless restaurants still struggle to find employees who want to work instead of living off of COVID welfare.

While local media and idiotic paid local bloggers try to push the “Vegas in back” mantra so they can keep getting their free drinks and casino comps, I can tell you from firsthand experience that this is not the Las Vegas we once knew and loved.

Our Experience at NFR…

We did the full 10 days, and we experienced it as tourists. We checked into some strip hotels (100% MASKLESS), and tried not to leave the Las Vegas Strip, in order to get a real-world firsthand look at what it’s like experiencing our city from the outside.

NFR itself was great. The Rodeo was a fucking blast, the concerts were fun –despite most of them being that new school pop country crap that we hate – and seeing people’s smiling faces was a breath of fresh air! NFR folks were nothing but polite, and it was a huge change seeing people with respect come to our town instead of a bunch of South-Central Los Angeles gang members who seem to be the city’s new target market.

What wasn’t great, was the usual bullshit that we’ve sadly have become almost immune to became even more overwhelming once you realized that our city — a city that once was famous for service and experience — has become a shadow of what it once was.

The crime, homeless assholes, and the smell of the strip were beyond disgusting. As we walked from NFR events at the MGM down to the Mirage, the smell of rancid Maple Syrup overwhelms you at almost every bridge overpass – for those that don’t know what that smell is, it’s the smell of rotting urine from the homeless who use the strip as a bathroom combined with rat urine from the rats that have moved into areas around the strip thanks to the homeless who literally live in the corridors of almost every casino.

The Tyrants Lost some of their power…

Thanks to the NFR cowboys, besides an incident at Cowboy Christmas and a couple of random nutjobs who yelled at us while entering the Cosmo and Caesars, we were never really harassed about not having masks. While we have never worn the compliance masks throughout this whole nightmare, I was surprised at how it felt finally not being an army of one!

But the biggest letdown for us was the lack of service. It was beyond apparent how short-staffed every business really was. As a tourist who doesn’t walk the outside of the strip, you may have not even noticed the bums and the criminals, but you sure as hell noticed the lack of open restaurants after a long night of NFR, concerts, and drinking.

After around 10 PM, the strip seems to almost shut down. While the bars are still open, and you can of course gamble 24/7, finding food became a bit of a nightmare. Finally, we gave up, figured that’s what a tourist would have to do – that or go to bed hungry – hopped into an Uber (MASKLESS) and headed out to Chinatown and our usual off-strip spots.

Stop standing around waiting for phony political saviors — Time to say NO to the mandates!

As you are witnessing during NFR, there is power in numbers! Take off the masks, they cannot stop all of us! pic.twitter.com/nZpSuw4NYP