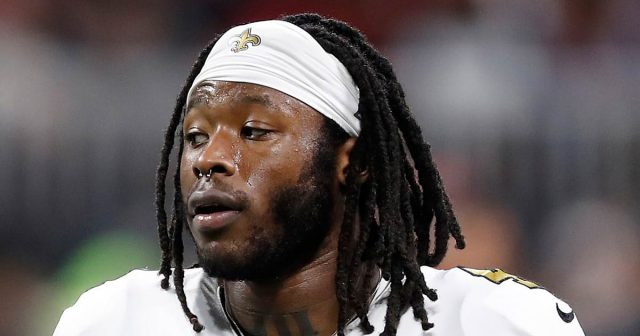 It’s hard to make a case that bringing the Raiders to Las Vegas and stealing almost a billion dollars in tax-payer money to build Allegiant Stadium has been anything but a disaster.

In yet the latest Allegiant Stadium related violence to plague our city, New Orleans Saints Alvin Kamara was arrested today in Las Vegas. The arrest came just hours after being allowed to play in the Pro Bowl, despite being accused of beating the hell out of someone this weekend at Drai’s nightclub on the Las Vegas Strip.

26-year-old New Orleans Saints running back Alvin Kamara was arrested for Felony Battery today right after the Pro Bowl, which Las Vegas Metro Police apparently allowed him to play before arresting him. Las Vegas Metro PD says officers were dispatched to a local hospital at 5:50 PM on February 5th for a person who reported getting “battered” at a local nightclub.

According to the video surveillance, Alvin Kamara punched the man at least 8 times. Three others from Kamara’s group then began stomping the man in the face, chest and legs, and then beat him unconscious. One of Kamara’s associates stomped him around 16 times, according to the police report.

Our sources tell us that Kamara and his group where then escorted away from Drai’s by Caesars Entertainment security. Apparently they too felt protecting the NFL star was much more important than holding him accountable for his crimes.

Please click on the document below for more information on the arrest of Alvin Kamara. This investigation is still ongoing, anyone with any information about this incident is urged to call 702-828-3204 or contact @CrimeStoppersNV pic.twitter.com/QoUY9tEQT1

Despite knowing that Kamara was accused of committing the crime, and knowing full well where he was in the lead up to the Pro Bowl, it seems someone told Las Vegas Metro to hold off on the arrest so as not to spoil the Pro Bowl – which would be yet the latest embarrassment for Steve Sisolak, Raider’s Owner Mark Davis, and everyone involved in the Allegiant Stadium debacle.

At $750 million in taxpayer dollars, Allegiant Stadium was the largest direct public subsidy for a stadium ever granted!

Despite being funded by taxpayers, half of the town is banned from even entering Allegiant Stadium after owner Mark Davis banned unvaccinated people from attending games — that is unless you are famous, or a friend of Davis then you can enter without masks and without your vaccination.

And thanks to our corrupt governor, and his so-called “emergency directive“, the stadium is somehow one of the only places in Las Vegas exempt to the mask mandates that are killing small businesses throughout the state.

Look at those smiles!

Oh wow, we can look at those smiles?

Who needs mandates and regulations when you are the Honorable Henderson Mayor ????@debra_march and Mark Davis along with members of the @LVAces https://t.co/y2ac6YyDpy

On top of banning unvaccinated people from Allegiant stadium, several Raider’s players have been involved in multiple crimes throughout Las Vegas since bringing the troubled team to town.

Just days after Ruggs killed the girl, his teammate Damon Arnette was cut from the team after a video surfaced of the player holding firearms while threatening to kill people. Arnette was later arrested on gun and drug charges in Las Vegas.