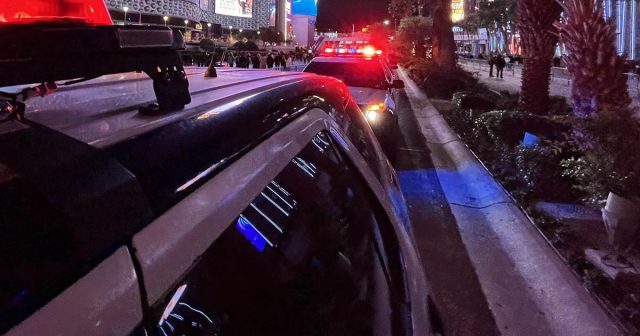 A man was stabbed multiple times last night near the 1200 block of Las Vegas Boulevard South, just south of Charleston Boulevard. Not much is known about the incident, other than police say they found a man on the road with what appeared to be multiple stab wounds.

He was taken to University Medical Center. No other information has been released from Las Vegas Metro.

The incident was the latest episode of violence in our city; last night alone we had this stabbing, a man shot and killed in the parking lot of Palance Station, a woman shot in the chest and killed at Fashion Show Mall, two people shot inside an arcade at Meadows Mall, and a robbery at the Sahara Casino.

The night of violence follows a violent month of December where we had a murder inside the Rio, a shooting inside Bally’s, a housekeeper killed at Bally’s, a man stabbed by a homeless man inside the Paris Casino, a man shot 11 times by a homeless addict in Chinatown, and countless assaults inside Casinos and throughout Las Vegas.

Lombardo and Sisolak both need to be removed from office for dereliction of duty!

After almost two years of record violence in Las Vegas, no matter how bad their political machines want to make excuses there is no way to spin it, our governor and our sheriff have both failed to do their jobs and have turned our city into a third-world style hellhole.

Last night, while people were being shot, stabbed, and killed throughout our city, our braindead governor was on Twitter bragging about how safe he was keeping Las Vegas this New Year. At the same time, he was sending Gaming Board Taskforce members into Casinos to harass people about wearing compliance masks. People throughout the strip corridor reported seeing National Guard troops inside the casinos, apparently trying to send Sisolak’s message to the masses – you better wear your masks!

Two shootings at two different Vegas malls in a span of an hour and this putz has the balls to tweet about keeping people safe!https://t.co/UYGXVa1fc9 https://t.co/tcyoOvfTCU

So while people were being slaughtered on the strip, our National Guard, under orders from our Governor, were standing around like idiots holding rifles next to slot machines in a show of force that apparently did nothing to stop the violence, but did scare some people into keeping their masks on!

Three shootings in one night and instead of stopping the violence our moron Governor is using the national guard to intimidate people into wearing masks inside Las Vegas Casinos!https://t.co/qxukIfhLUu pic.twitter.com/TzPfIonV4t