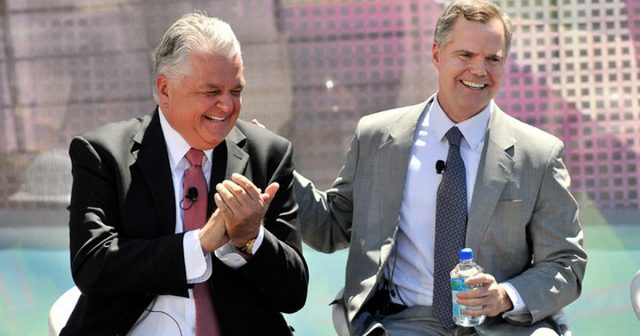 In fact, most are heavily profiting from the very shutdowns they are promoting. Here are some of the worst offenders.

As the Jim Murren COVID taskforce shuts down Nevada businesses, Remember he got a $32 million payout from MGM to help them exploit/profit from his role! Murren has now set up a SPAC to profit from the shut downs he helped make happen! https://t.co/mygiz0qiNQ pic.twitter.com/WxtkhFekoW

After leaving MGM Resorts with a $32 million payout, and while serving on the COVID taskforce, Jim Murren teamed up with former Morgan Stanley veterans Edward King and Daniel Fetters to benefit from the destruction of Las Vegas as they formed a Special Purpose Acquisition Company (SPAC) to pursue potential deals in online gaming and buying up bankrupt live event and entertainment-related businesses.

Andrew Pascal is also the founder, chairman, and CEO of PLAYSTUDIOS, a company that develops casino games for mobile and social media platforms. A company that is now making a killing due to the shutdown.

Pascal, who is also Task Force Head Jim Murren’s neighbor, created Sisolak’s Nevada COVID Tracing App – an App that has been used to justify the shutdowns in Las Vegas.

According to the RJ:

Early in the outbreak, Pascal had conversations with Jim Murren, chairman of the Nevada COVID-19 Response, Relief and Recovery Task Force, about helping the state’s effort.

Pascal, who a decade ago served as president and chief operating officer of Wynn Las Vegas, and Murren, who stepped down earlier this year as chairman and CEO of MGM Resorts International, have known one another for more than 25 years. Pascal described Murren as both a mentor and friend, and they also are neighbors in the The Ridges, an upscale neighborhood in the far west Las Vegas Valley.

“What I told Dudley was that I felt like Nevada was really in a unique situation, where you had a group chaired by Jim at the urging of the governor to go help find and solve these problems,” Pascal said. “And so we would have a receptive audience not only with Jim and the task force, but also the opportunity to really educate the governor’s office and all the appropriate health agencies within the state about the solution.”

He said he and Murren began to “evangelize” for the app to get buy-in from state health officials, government leaders and businesses. There was some hesitancy, particularly around issues of privacy.

Anyone else see a major conflict of interest? Anyone else have a problem with the people who are promoting the shutdowns profiting from them at the same time?

It’s easy for Rep. Susie Lee of Nevada to cheer for the Sisolak Shutdowns. She has assets worth $35,712,000, has 17 homes, private jets, and her husband’s Casino Company, Full House Resorts, Took $5.6 million in COVID Funds!

After the CARES act was passed, Full House Resorts — the company owned and operated by Lee’s husband, Dan — applied for and received $5.6 million across two PPP loans. Lee and her husband who own millions in stock and stock options for Full House, saw their stock prices immediately soar in value.

But it’s not just the big guys, it seems corrupt politicians at every level of local government are profiting off of your misery. Here are a couple that we thought deserved a special shout out!

R&R Partners has been stealing/profiting from Nevada tax dollars for decades. The creators of the “What happens here, stays here” slogan, a company that hasn’t had a successful Vegas Ad campaign since, have continued to rake in millions of dollars through their partnership with The Las Vegas Convention and Visitors Authority.

Despite years of failed campaigns, The Las Vegas Convention and Visitors Authority pays R&R Partners roughly $110 million a year to “promote” Las Vegas. Some of that money is funneled to Corrupt political officials like Clark County Commissioner Lawrence Weekly who while Chairman at LVCVA helped spend room tax money on $700,000 in alcohol & $85,000 on showgirls!

As the city crashed, LVCVA continued to pay them for failed campaigns that have done nothing to help our city rebound. But on top of being paid for useless “socially distanced playground” campaigns, campaigns that failed to bring visitors to our city, they received over $5 million in CARES Act PPP funds, despite still being paid with tax dollars from the LVCVA.

While her goon squads target businesses for destruction, she brings in a cool half-million dollars of your tax payer money every year!

When you get a visit from the Goons at @ClarkCountyNV demanding you shut down your business, just remember that your business helps pay the County Manager $509,388.46 a year! She still collects her money during the Shut Downs as you go bankrupt!! https://t.co/vO6K5ihcCo pic.twitter.com/Q7sBtOn4EZ

As @ClarkCountySch bans your kids from going to public school, just remember that Clark County School District superintendent Jesus F Jara is still collecting $435,768.00 a year — that doesn’t even include his “travel” expenses! https://t.co/ibtEFlJOfG pic.twitter.com/3AhcQcduuG

When Nevada Senator Jacky Rosen Celebrates the Sisolak Shut Downs, remember she has a net worth of $5.2+ million. She still get to steal your tax payer dollars as you go bankrupt!https://t.co/jFCoGNi6zB pic.twitter.com/fwNCUsHB3R

As Dina Titus celebrates the Shut Downs, Don’t forget she is one of the richest members of Congress… How exactly does a little congresswoman from Vegas have an estimated net worth of over $10 million dollars? pic.twitter.com/Tps3cE8d7m