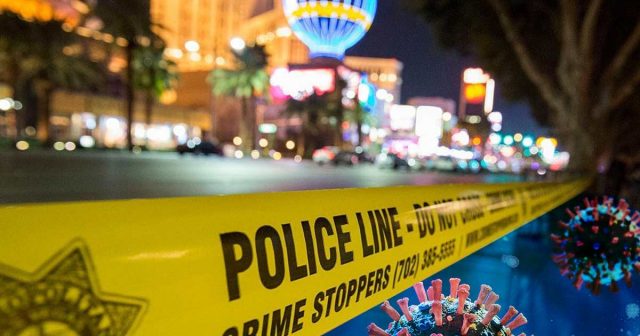 The local media, Governor Steve Sisolak, and the COVID Taskforce will never tell you this — But, we will. If you are under the age of 40, you have a 323% higher risk of being murdered in the city of Las Vegas than dying of COVID!!!!

For over a year now, State, County and City politicians have been using the local media to push an all-out assault on our senses – trying to make you believe that living a normal life would somehow put you at risk of dying from what they say is one of the deadliest pandemics of all time – it’s not!

From the actions the government has taken, most people under 40 seem to have been brainwashed, despite all scientific evidence to the contrary, into believing they are at risk of dying from COVID. We’ve shut down schools for over a year, local colleges like UNLV are basically online schools at this point, bars and restaurants were shut down for months — and still to this day face idiotic capacity restrictions — and then of course we have the disgusting fabric facemasks!

The people least at risk, are the ones living with the most fear!

Oddly, the demographic that is least at risk of dying is also the demographic that has bought into the propaganda hook, line and sinker, and slipped the furthest into severe health psychosis, strapping on multiple useless fabric masks, wearing face shields on top of them, and even driving fully masked while alone in their own vehicles.

If you were dropped here from an alien planet, and were new to the propaganda, looking around you would believe that it was people under the age of 40 who were most at risk…

YOU WOULD BE WRONG!

More people under the age of 40, have been Murdered in Las Vegas than Died of COVID since the So-called “Pandemic” Started!

We estimate that 22 people under the age of 40 have died of COVID in Las Vegas, since the pandemic stated!

Why estimate, instead of giving the hard numbers?

Well, we wish we could give you the exact number. But the fact is the State, the COVID Taskforce, local media outlets, and local governments are all hiding the hard raw data, making it almost impossible for people to see anything but generic datasets. But we will provide you with the data we have found, and unlike the local media who spoon-feeds you government propaganda, we will let you look at it and decide for yourself.

The DATA the Government and the Media want to Hide

According to The Las Vegas Metro Police Department, 68 people under the age of 40 have been killed in their Las Vegas Jurisdiction.

During that same time, since the so-called COVID pandemic started, only 22 people in that same age group have died in Las Vegas from COVID!

Where does the 22 deaths number come from?

According to the U.S. Census, there are 3,080,156 in the state of Nevada — 651,319 are in Las Vegas. That means about 21% of the state’s population lives in Las Vegas. So we are going to use those numbers to give us a rough estimate of Las Vegas COVID deaths.

So we know for a fact, from CDC numbers, only 104 people – in THE ENTIRE STATE OF NEVADA —  under the age of 40, have died of COVID since this so-called pandemic started. Given that Las Vegas is 21% of Nevada’s population, you would estimate that out of those 104 deaths about 22 of those deaths were inside the city of Las Vegas. But hell, let’s say 50% of the deaths were in Las Vegas, you would still be looking at more people under the age of 40 being murdered in the city of Las Vegas than dying from the so-called COVID pandemic!

Also, keep in mind that when we are looking at CDC numbers, it includes people who died while being marked as “positive” for COVID. That means that out of those 104 deaths, just like all the so-called COVID deaths, that number actually includes people who died of other causes unrelated to COVID, but have been added to the pandemic total because a positive test was found after death. But, for the sake of this article we will “pretend” that all of them died exclusively from COVID!

So why isn’t Governor Sisolak Demanding we Lower the Murder Numbers?

For over a year now, Governor Steve Sisolak has been on a one-man, militant campaign of shutdowns, economic terrorism, and demanding that everyone in the state wears his useless compliance masks, all while saying NOTHING about the mass-violence, nightly fights, attacks from homeless drug addicts, stabbings and even murders that have plagued our city due to his shutdowns and the havoc he has brought to Las Vegas.

Despite no evidence to support masks doing anything to stop the virus, the governor has stated that he has no intention of lifting the mandate anytime this year.

So what is this all about?

We believe, that just like how he used the October 1 shootings in Las Vegas as a marketing tool to get elected, this is all about seizing power and control. In fact, if you look at who has gained the most from his shutdowns, it’s the people around him that seem to be financially benefiting, while the rest of Nevada burns.

Sisolak and Friends getting rich off of COVID Shutdowns!

We’ve been covering Sisolak’s abuse and how he is using the COVID taskforce to target his enemies and allow friends like Jim Murren to bankrupt his competition and then buy these businesses for pennies on the dollar for months now.

From pushing for the corporate takeover of Nevada by allowing corporations to start their own company towns to letting his friend Andrew Pascal get rich off of the shut downs he helped push with the COVID tracing App, Sisolak seems hellbent on using the so-called COVID pandemic to wreak havoc on our state.

If any of this was about public health, wouldn’t the Governor be equally as concerned about the murders and the mass-violence on the strip? Shouldn’t his office and the local media be talking about issues like:

I guess it’s easier to scare people who have almost no chance of being affected by the virus into living in fear so they don’t see what’s really going on!