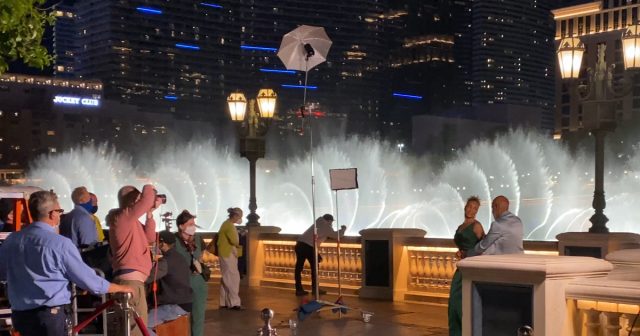 In a follow-up to our article on Monday, where we exposed the millions upon millions of tax-payer dollars being wasted on commercials trying to pretend Las Vegas is safe, while people are literally being shot dead in the streets, stabbed, and assaulted as film crews stage their shots, it seems city, county, and government officials have decided that instead of cleaning up the streets and ensuring visitor safety, they are just going to fake it until they make it!

Over the last couple of days, we watched film crews filming the latest set of million dollar LVCVA ads, where they are trying to convince people that Vegas is back and safe. Ironically, they had to block off the entire area in front of the Bellagio, using Las Vegas Metro Police as armed guards, to ensure that they didn’t accidently film a shooting, a bum overdosing, or some other bit of the nightly chaos.

But of course, just feet away, tourists were exposed to the real Las Vegas under Governor Steve Sisolak’s reign of terror.

Literally right across the way you have bums sleeping in front of Planet Hollywood and another bum masterbaiting in front of people. pic.twitter.com/1z4Z8GYUwN

Sadly, this pales in comparison to what we’ve seen over the last year – hell, over the last couple of weeks we’ve had two shootings (the deadly one across from Aria, and the one at The Flamingo) numerous unreported attacks by homeless drug addicts, a stabbing at the Cosmopolitan, criminal bike gangs attacking tourists and security guards, criminals trashing our infrastructure, BLM fighting with tourists, and a man being brutally beaten by a pack of thugs over a taco.

$110 MILLION a year in tax money is going to R&R Partners to Pretend Vegas is Safe!

Instead of saturating the Las Vegas Strip with Police, and taking a week or so to arrest every single drug addict, pimp, thug, and mentally ill psycho who has set up camp on the strip, local authorities are instead wasting $110 million a year to give to an ad agency that is literally recycling the one successful slogan they came up with over a decade ago.