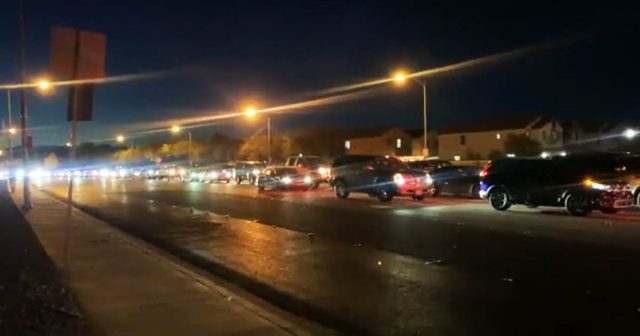 For the second weekend in a row, absolute madness has taken over our city as thousands upon thousands of cars once again line up for COVID tests and vaccinations at the Sam Boyd testing site.

? — well @GovSisolak can’t get tourists here for trade shows, but he can create traffic jams with thousands of people lining up for the fantasy virus tests!

Who is profiting from this?

If anyone is trying to go to Sam Boyd for Covid testing , there is a minimum of 600+ cars already and there is no traffic control and there are cars everywhere. This is at 4:30pm, an hour before testing even starts pic.twitter.com/wpNaztXtIN

The line for Covid testing at Sam Boyd, the site doesn’t open for another hour, and they’ve been lining up since 2. @LasVegasLocally pic.twitter.com/deqVU43cZT

Of course the idiots in our government on the Clark County Commission are celebrating the complete collapse in sanity and their inability to get these test sites right after 2 YEARS as some sorry of win.

#COVID19 Update: the new drive-thru site @SamBoydStadium in SE Las #Vegas is now open. Hours are 5:30pm-10:30pm Sunday thru Thursday. Facility can do 300 vaccinations and 1,200 tests daily. The site is run by the @SNHDinfo, @ClarkCountyFD, @NVNationalGuard and @UNLV. pic.twitter.com/ZH0yyGnhS4

Sadly, it seems people are losing all grip on reality. While the media goes into overdrive trying to debunk “mass psychosis” we have thousands of people waiting in testing lines, many of who have zero symptoms, and people like this walking around in the world…