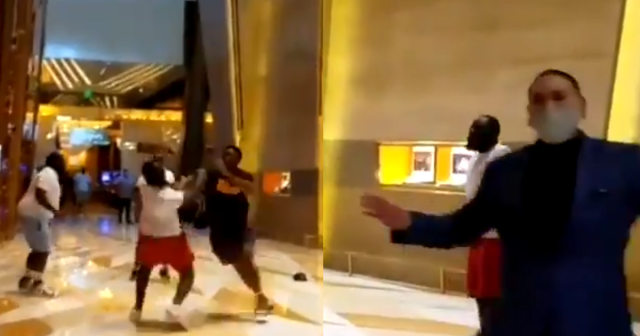 As we come up on almost a year of shutdowns and unchecked violence on the Las Vegas Strip, it seems MGM Resorts has given up on trying to stop the rampant gang warfare and violence inside their Casinos and has instead switched their focus to stopping people from filming what’s actually going on in their shit holes resorts!

Another video surfaced today of security watching a fight inside the Aria Hotel and Casino; instead of focusing on the violence and trying to protect their guests, security instead turned their focus on the person filming.

Late last year, video surfaced of the dealers actually fighting with players at table games inside the Aria.

The Las Vegas strip may be a Ghost Town, but it looks like the violence hasn’t stopped… this was a fight between a dealer and a player at the Aria earlier this week. I can’t imagine why anyone is still coming here to sit in these plexiglass prison cages & risk being assaulted! pic.twitter.com/6YqOEjPwnV

But as we’ve also reported, it seems to be all part of the plan to help MGM, Jim Murren and Andrew Pascal bankrupt the city and their competition so they can swoop in and buy everything up at fire sale prices!