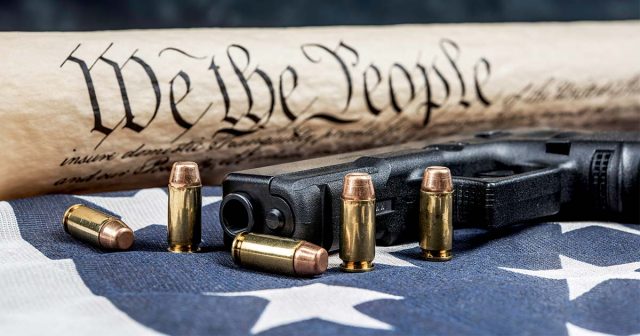 It seems Jim Murren and his buddies over at MGM are hellbent on stopping law-abiding citizens from being able to protect themselves, thus ensuring the only people caring guns on the Las Vegas Strip will be the criminals who have wreaked havoc on our city.

Yesterday, Nevada Democrats used an emergency measure to pass an MGM backed gun ban bill in the Nevada Senate, baring law abiding citizens with conceal carry permits from being able to carry a firearms in Las Vegas Strip Casinos and “certain gaming-connected businesses, such as hotels and shopping malls”. The “restriction” extends to the property line, meaning the firearm prohibition includes open areas like parking lots, with limited exceptions.

Senate Bill 452 prohibits anyone, including concealed carry permit holders, from possessing a firearm at certain “covered premises,” which includes all real property containing a licensed gaming establishment owned and operated by a person with an unrestricted gaming license, absent narrow and limited circumstances, or if an individual has written consent. The bill contains no requirements for gun-free businesses to provide any security measures to guarantee the safety of disarmed patrons, such as security guards or metal detectors, to prevent armed criminals from ignoring the arbitrary boundaries and entering.

Under SB452, gaming properties will post signs notifying visitors that firearms — including those carried by law-abiding concealed carry holders — are illegal on the premises. Those who violate the unconstitutional travesty of a bill, will be given in a misdemeanor charge punishable by up to a year in jail and $2,000 in fines.

The bill now heads to the Assembly for consideration.

Sen. Dina Neal, D-North Las Vegas, joined Senate Republicans in opposition to the unconstitutional bill — she had no problem with stripping law-abiding gun owners of their constitutional rights, she just thought the bill was racist and was worried police would use it to “harass minorities”.

Sen. Ira Hansen, R-Sparks, said the bill will make going to a casino less safe. He said a large portion of guns reported stolen are stolen from vehicles and that this bill will force people to return to their car and put the gun in the glove box where crooks know to look.

Clark County Public Defender John Piro expressed concerns the bill would lead to stop and frisk actions by the Metropolitan Police. Sen. Ira Hansen, R-Sparks, said the bill “is almost asking to pat some one down.”

Dan Reid of the NRA asked why MGM can’t take care of its own security issues by arming its security staff.

Assembly Bill 286, sponsored by Assembly Member Sandra Jauregui (D-41), is now on it’s way to Sisolak’s desk as well. According to the NRA, the bill essentially bans home-built firearms for personal use by imposing requirements that far exceed those in federal law. It prohibits private individuals from possessing certain unregulated components commonly used by hobbyists to make their own firearms. This confiscatory bill also bans possession of existing, legal, firearms without serial numbers, such as home-built firearms, but it does exempt pre-1969 firearms. This exemption covers firearms made before federal law required licensed manufacturers and importers to place serial numbers on their commercially produced or imported firearms.

MGM believes they are more powerful than the voter!

Here is former MGM CEO Jim Murren admitting that MGM Resorts uses it’s corporate power to basically do whatever they want and to change any law they want in the state. Remember this next time you spend money at MGM that every penny you spend at an MGM property is used to SCREW you and overturn the voters will!