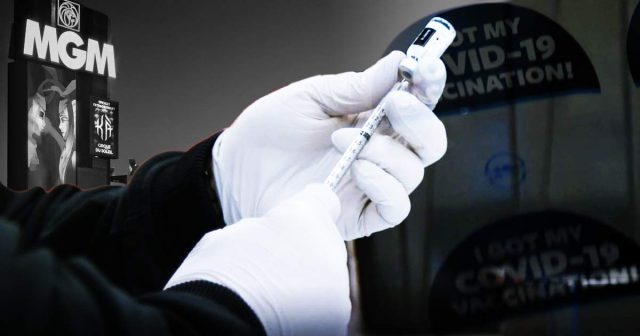 Beginning this week, MGM is pushing the next wave in COVID fear and vaccination propaganda, by randomly COVID testing employees who refuse to get vaccinated and carry the COVID mark vaccine verification stickers.

In an attempt to again force vaccines on their employees, MGM is threatening that anyone who tests positive or has a so-called “exposure” to someone who tests positive will be forced to quarantine without pay – of course, the sheep who took the vaccine and still test positive (because the vaccine doesn’t actually stop you from getting covid or spreading it) will be granted full pay.

MGM is also encouraging their workers to become snitches and turn in anyone they suspect of having “close contact” to COVID-19 outside of work. That is right, MGM is so desperate to push their vaccine scam, and force employees to take the experimental jab, that they are now asking employees to turn on anyone who hasn’t taken the jab if they “suspect” they may have been around the fairytale virus.

Those that Refuse the test will be sent home without pay!

According to a leaked memo, employees who refuse the testing will be sent home without pay and then contacted (threatened) by “someone from employee relations”. Those who are vaccinated, even though they can still catch and transmit covid, will not be required to take part in testing – because we know the end goal isn’t actually to stop the transmission, but to push the experiment on everyone and control the masses!

The memos went out around the same time that Governor Steve Sisolak held a press conference announcing that he had asked the federal government to send in so-called “Surge Teams” which are expected to go door to door in Las Vegas in an attempt to harass and scare the shit out of people who haven’t complied with the vaccine propaganda campaign.

You have a greater chance of being assaulted, robbed or murdered at an MGM property than dying from the fairytale virus!

Oddly, while MGM pretends to care about public health, they seem to be unwilling to do anything about the mass violence inside their resorts. Instead of threatening employees over a cold, maybe they should do something to keep their guests safe from the violence inside their casinos and hotels!

As we reported yesterday, yet another attack happened at an MGM resort; this time, a woman says she was forcibly taken from the High Limit Lounge at Aria and brutally rapped and assaulted in the Aria. So when MGM claims to care about your health and safety, remember they are unwilling to stop ghetto thugs from assaulting, shooting, and raping people inside their hotels — it seems helping Sisolak disarm law abiding citizens and push the experimental vaccine is more important.