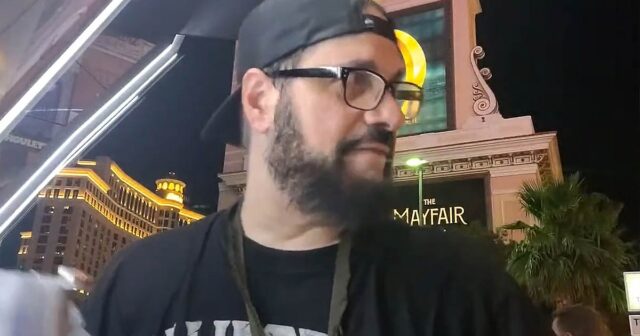 A mentally-ill internet “influencer” who calls himself OG Geezer and has made a name for himself by live streaming himself brutally harassing tourists nightly on the Las Vegas Strip was caught on Live stream last night trying to induce panic, screaming about a mass shooter, and threatening to kill tourists in front of the Cosmopolitan. This went on for almost half an hour without a single police officer or security guard ever trying to stop him.

But there is nothing to see here, right?

After all, the police claim it was just a rock hitting the MGM that caused tens of thousands of people at seven different Las Vegas Strip Casinos to report gunfire and take off in a massive stampede. They claim no other incidents happened!

While this video may be shocking for those who don’t frequent the Las Vegas Strip, this is actually a nightly occurrence up and down the strip. From mentally-ill drug, addicted nutjobs assaulting tourists to mentally-ill internet streamers and so-called bloggers harassing tourists so they can get famous online, the Las Vegas Strip has turned into a demented freakshow where no one is safe!

7 separate Las Vegas strip casinos reported stampedes and reports of shootings… but nothing happened according to authorities!!!

Here is What happened at Aria. pic.twitter.com/OlglX2p4AB

The same wacko got himself stabbed after screaming racial slurs at tourists last year on the Las Vegas Strip.

The moment the Las Vegas Convention and Visitors Authority started paying social media influencers to come to Las Vegas, we knew things were going to get even worse. Las Vegas has become not only a joke, but a downright dangerous place to be. From the shootings on Fremont Street to the No-Go Zones taken over by gangs and homeless addicts on the strip, when is our local media going to start talking about the problem?

But again, don’t worry, according to the local media, police and local bloggers, it was just a rock hitting the MGM!