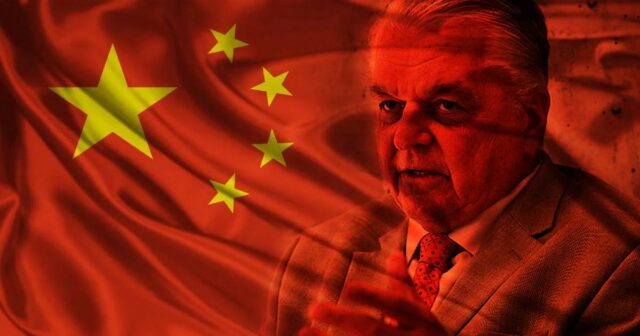 In the latest installment of fake news and pure democrat propaganda from our local lying news media, the local propagandists have all come together with our POS governor to try to convince locals that speaking your mind is now somehow a crime.

This morning, they all started breathlessly reporting that Governor Steve Sisolak would not be pressing charges against a man who recorded himself giving our economy-destroying governor a piece of his mind. In the video, a man, identified as Justin Andersch, went off on the governor telling him he believed him to be a new world order traitor and owned by the communist China regime.

Of course, our local media immediately twisted the story, claiming Andersch was a racist because he mentioned the Chinese government’s involvement in Sisolak’s COVID scams and because the traitor’s wife happens to be of Asian descent. Apparently even saying the word Chinese in the queen’s presence is now considered a criminal act of Racism.

Unfortunately for the media and our governor, our founders gave us something known as the 1st amendment, so while they pretend this man committed some sort of crime, the fact is speech is still a protected right in this country. You may not like what he said, or how he said it, but he has the RIGHT to say it!

You may find Andersch’s approach distasteful, but too damn bad – in this country, he has the right to confront a tyrant who has killed our economy, destroyed countless lives, and pushed medical slavery and segregation on the populous.

I have asked District Attorney Wolfson not to pursue prosecution that could arise from the abusive and menacing treatment my family and I experienced at a local restaurant several weeks ago.

As a husband, I’m outraged at the ethnic slurs and threats aimed at my wife. As a father, I cannot forget or forgive the vulgar and foul language hurled at my daughter.

However, as Governor of this great State, I feel an obligation to avoid further fueling, and at worst, glorifying the anger and violence plaguing our nation and our State. A trial, should it occur, would cause further coverage, and provide this small minority of Nevadans more opportunity to spew their vile.

I ask our friends in the media to pay more attention to the thousands of acts of kindness and the charitable activities of our many kindhearted Nevadans, and to resist the temptation to air, post or print the few vulgar and disgusting acts of a handful. Our kids are taught, in their schools and churches, to be kind, we should be more focused to mirror that in our homes.

To practice what I preach, this statement stands as my final comment about this horrible incident.

It’s beyond disgusting how the democrat party, and the spineless Republicans who won’t call them out, all bring race into the conversation when attempting to shut down their political opposition. It’s very clear in the video that no ethnic slurs were used against the tyrant’s wife, in fact, he very clearly said the governor is working for China — something that has some truth to it, considering he has helped the communists devastate and destroy our state.

But if the media wants to talk about bringing charges against someone, maybe they should start investigating Sisolak’s rumored drunk driving incident and how his wife was caught on camera removing evidence from a crime scene – ACTUAL CRIMES!

Or maybe the media can talk about how the governor and his wife used fake claims of racism to try to imprison an innocent man!