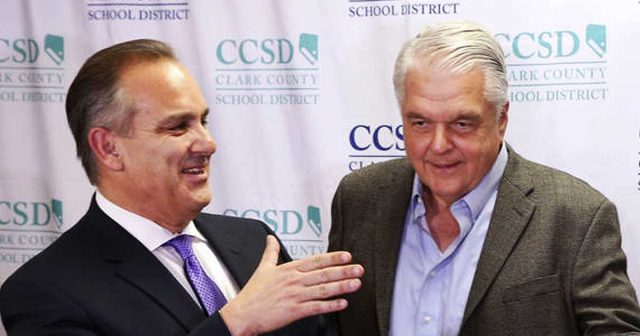 While the CCSD board of Trustees and our local media obsess over masks and vaccine mandates, our local Las Vegas schools have been plagued by another year of mass violence, rioting, and shootings.

You would think that stopping students from being stabbed in school hallways and stopping gunfire from breaking out at high school football games would be an issue that everyone could get behind, but apparently, it’s just the standard operating protocol for CCSD schools.

This is what MIDDLE SCHOOL looks like in Las Vegas

This is footage we obtained from Del E Webb Middle school in Henderson.

This is what you’re sending your child into if you send them to a CCSD school – This is Del E Webb Middle school.

Remember this when they push the fake mandates & pretend to care about health & safety! @ClarkCountySch & @SuptJaraCCSD don’t care about your kids! pic.twitter.com/e8GpoarpBQ

Earlier this month, gunfire broke out at a football game at Desert Oasis High School. To date, Governor Sisolak, CCSD Superintendent Dr. Jesus F. Jara, and the CCSD board of Trustees have all failed to address what happened.

Local father Christopher Wagner has been trying to warn parents what is happening, and has taken to social media to highlight how no one at CCSD is taking the issue seriusly.

Governor, do you hear that? That was six gunshots at H.S. game after a student was jumped. Maybe we will be lucky enough to get a comment from you, but it appears someone will have to get killed first. @GovSisolak @SylviaLazos @SylviaLazos @SuptJaraCCSD @CNN @FoxNews pic.twitter.com/2zX4kjmBco

Still no comment from the Governor. Does school violence, guns, and weapons on campus concern you? Here is a reminder of the state of Vegas Schools. Still awaiting a response to my letter. @GovSisolak @SylviaLazos @SuptJaraCCSD @ClarkCountySch @MackMiller4NV #VegasSchoolsUnsafe pic.twitter.com/VJE7dBzNWJ

I am a registered Democrat disenfranchised due to the Violence and Lack of Transparency in the CCSD. No response from Sisolak, Jara, & Trustees. Assemblywoman Gorelow only one to respond.@MackMiller4NV @GovSisolak @SuptJaraCCSD @nevada_parent pic.twitter.com/v2eiOm3Zuk

Last month, we covered the rioting and violence at Shadow Ridge and Arbor View High school, where students were being attacked and targeted for wearing patriotic clothing at school. A couple weeks before that, riots broke out at Green Valley High School.

Welcome to @ClarkCountySch Green Valley High School where they force your kids to wear masks and are pushing for mandatory vaccinations but they can’t stop riots and assaults and actually safety issues! pic.twitter.com/bV8zkVnmfn

But those stories are really just the tip of the iceberg.

Back in 2019, before everyone became obsessed with the “pandemic” we ran a series of articles trying to expose what was happening in Las Vegas schools. From a 16-year-old girl who was stabbed multiple times in the stomach by a 14-year-old student at Clark High School back in 2017 to years of brutal hate crimes that have been covered up by CCSD, this is an issue that is not only not going away, it is getting worse!

In 2013, CCSD changed their disciplinary policies on the suspension and expulsion of minority students. Instead of holding these kids accountable for their crimes inside Las Vegas schools, they decided to ignore the problem because suspending them was somehow seen as racist.

The district changed protocols to reduce the overall number of suspensions and expulsions of minority students, limiting when a principal can recommend expelling a minority.

Are Minorities in Vegas Schools rewarded for causing trouble?

You really can’t make this stuff up. Bonanza High School and Cheyenne High School actually rewards minorities who commit crimes instead of suspending them!

According to the Review Journal, instead of punishing minorities who are causing problems they reward them with therapy dogs, treadmills, and art supplies.

At Bonanza, a classroom across from the main office is outfitted with a treadmill, a couch and ample art supplies and board games. Jermone Riley, the school’s behavioral strategist, wanted it full of ways to help kids blow off steam and avoid confrontation.

Eldorado High School Principal David Wilson admitted that the spike in violence was due to what he calls a “failed social experiment.”

The Office for Civil Rights released a report in 2012 showing that black students were three times more likely to be suspended or expelled than white students. A year later, in 2013, a civil rights-related complaint was filed against the school district, Superintendent Pat Skorkowsky said.

Wanting to create a more equitable environment and avoid costly punitive measures, the district made its expulsion criteria stricter, Skorkowsky said. But he acknowledged the discipline system may need some tweaks given the increasing level of violence within schools.

“We have to rethink that piece yet again to try to figure out how can we provide an education to those students who have a right to it while keeping our campuses safe at the same time,” he said. “That is a huge challenge.”

Just a small look at your local Las Vegas Schools: Thanks to CCSD!

Please read our article on the benefits of homeschooling and how to homeschool your child in Las Vegas!