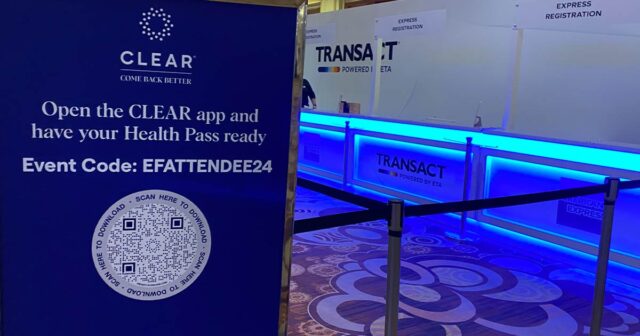 When they say Vegas is open for business, they are lying to you. What they should say is Vegas is open for medically segregated business where we now discriminate against those who didn’t inject themselves with an experimental government vaccine in order to be able to attend events in Las Vegas!

While the local media pretends the tradeshow industry is back in full swing, what they are not telling you is a huge number of conventions and seminars are still banning unvaccinated people from attending.  In fact, the dirty little secret is that most of them are requiring Clear Health Vaccine passports to get anywhere near the show.

In the last couple of weeks, we have been banned from covering at least a half dozen shows, shows that we have covered for years are now off-limits because we refuse to subject our employees to unnecessary health screenings and vaccine passports.

Earlier in the month, one of the largest tradeshows in Las Vegas, the National Broadcasters Show, a show that has seen attendance drop so low that it’s almost become unprofitable for them to even hold the event, again announced that they would be banning attendees who couldn’t provide a Clear Health Passport or a Negative COVID test.

ISE West, which held its conference a couple of weeks back at the Venetian, made attendees provide either proof of full vaccination against COVID-19 or a negative COVID-19 test as a condition of entry.

At the end of April, both ACG and InterGrowth will require proof of vaccination to gain entry to their conferences at the Aria.

Try getting into most Las Vegas conventions, and you will be assaulted with signage that basically tells you that you are not welcome unless you submit to the mass psychosis event and inject yourself with the government vaccine.

In June, Cisco Live, which takes place at Mandalay Bay, will force all attendees to provide proof of vaccination as a requirement for entry into their show. That same month INFOCOMM at the Las Vegas Convention Center will require proof of full vaccination OR a COVID-19 negative PCR or rapid antigen test to enter, and the Association of Professional Piercers conference is banning all unvaccinated people from their show.

In August, the NABJ and NAHJ conventions will require not only proof of vaccination but proof that you took the booster shots as well to gain entry to the show.

IMEX, a tradeshow for meeting and events professionals, announced that even though the world has moved on from the COVID scam, and even though their event isn’t until October of 2022, they too would be requiring Clear Health or SAFE pass Vaccine passports and health screenings to enter their show.

Convention and Visitors Authority, the Sisolak administration and the Democrats who sit on the Clark County Commission are still working behind the scenes to keep this scam going.

Anyone who thought these people were done pushing the COVID scam better think again, they are not only gearing up to clamp down on your rights after the elections, but they are actively banning people from doing business in Las Vegas if they don’t submit to the government tyranny that crashed our economy.

Hundreds of tradeshow industry businesses, and tens of thousands of tradeshow workers are still being banned from working and are being bankrupted by these unconstitutional measures.