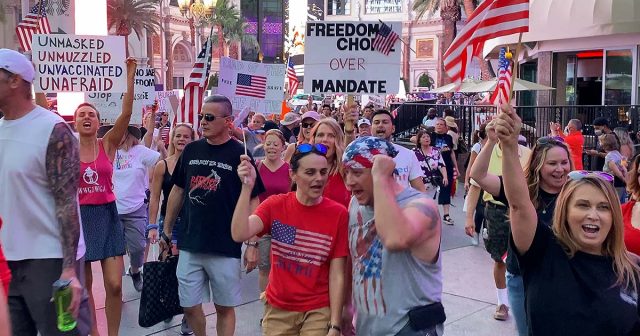 Yesterday, over 1,500 patriotic Las Vegas residents gathered on the Las Vegas Strip in a protest march to rally against the draconian business-killing COVID mandates enacted by Governor Steve Sisolak and the Clark County Commission.

While the local media seems to be able to send entire news crews to cover a 15 person BLM demonstration, not a single member of the “mainstream” Las Vegas media bothered to show up or say a word about what happened. It seems there is a real movement building, one that our local media and our local wannabe-dictator politicians don’t want the public to see.

They want you to believe you are alone!

Make no mistake, yesterday’s march demonstrated that there are a whole lot of patriotic people who are fed up and are willing to take a stand. We heard multiple people become very emotional yesterday seeing that they were not alone, and being overwhelmed by how many people not only showed up, but how many people thanked them in the streets as they passed.

How is it the local media is out in full force force for a 20 person BLM rally but nowhere to be found tonight for 1500+ COVID mandate protest on the Las Vegas Strip? pic.twitter.com/GW1pFS8ecM

Organizers are asking that on September 7th, Las Vegas residents join them as people walk off their jobs nationwide to protest the mask and vaccine mandates. Locally, people will be gathering outside the Grant Sawyer State Office at 555 E Washington Ave, Las Vegas from 4-6 pm.