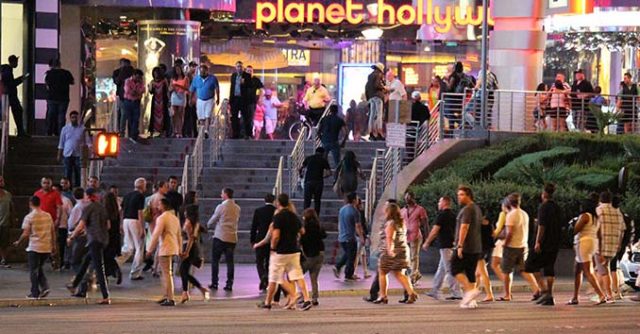 Police are investigating a shooting that happened in front of the Planet Hollywood Hotel and Casino on the Las Vegas Strip.

Officers were called to the Casino early Sunday morning, around 2:30 a.m., after a fight between two men quickly escalated and someone started shooting. Authorities say the shooting occurred near the entrance to the Miracle Mile Shops.

According to police spokesman Lt. Charles Jenkins, the fight escalated when one man pulled out a handgun and allegedly shot the other.  Jenkins says the victim was taken to UMC Trauma but his injuries are not life-threatening.

The suspected shooter was not apprehended at the scene and is currently on the loose. Despite happening right on the Las Vegas Strip, Metro claims they have no description of the suspect Anyone with further information on this incident is urged to contact Crime Stoppers at 702-385-5555.

Why won’t Las Vegas clean up the Strip? This is the kind of thing that happens when you allow degenerates to take over the Las Vegas Strip. For the last couple of years the City of Las Vegas, thanks to the useless politicians and gaming corporations who run the city, has allowed degenerate bums, scam artists, and drug addicts posing as Street Performers to take over the Strip.

If the city doesn’t start taking this type of thing seriously, Las Vegas will soon earn a reputation that will destroy our tourism industry. Nobody wants to spend thousands of dollars on a vacation to be accosted by street scum the moment they step out the Strip.

Metro may not be releasing a description of the people who were involved in this “altercation” but anyone who has walked the Strip lately probably has a pretty good idea what these people look like!

Las Vegas locals should be demanding action! It’s not hard to spot the degenerates, they are everywhere lately. Why do we spend billions of tax dollars on fancy security cameras for the police, when they allow drug addicts to lay passed out on an overpass that connects multiple multi-billion dollar hotels?