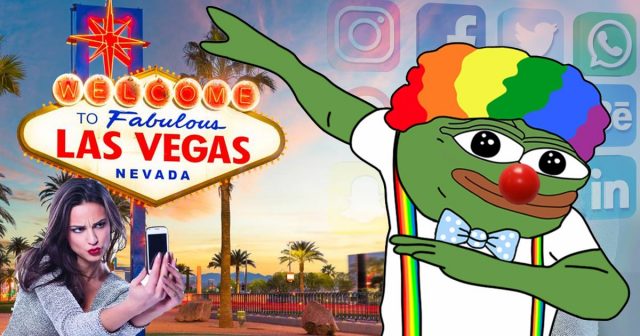 In the latest bit of thievery and complete waste of tax payer dollars, The Las Vegas Convention and Visitors Authority is yet again using R&R Partners – an ad agency that has failed Las Vegas for over a decade – to steal even more money from tax payers on yet another idiotic campaign that does nothing to fix our city.

The agency, which has soaked taxpayers for years, living off of their one successful “What Happens Here” campaign, is set to launch the latest bit of idiocracy to “lure tourists back to Vegas”.

Instead of fixing the mass violence, drug problems, murders, and homeless encampments that now fill the Las Vegas Strip, LVCVA and R&R Partners plan to use so-called “Social Media Influencers” to lie to tourists about how great Las Vegas has become under Fuhrer Sisolak.

Yep, the Las Vegas Convention and Visitors Authority’s answer is to pay a bunch of losers who think they are famous because they have an Instagram account, millions of our tax payer dollars to pretend they are having a good time in Las Vegas – all while trying not to be the latest person murdered on the Strip at the hands of a mentally ill homeless scumbag!

So instead of demanding we reopen at 100% capacity and stop the mask bullshit, instead of demanding Sisolak stop targeting businesses for destruction, and instead of cleaning up the disaster they have created in Las Vegas, apparently the answer to all of our problems is showing some “influencers” fix a flat tits and ass on Instagram.

They are using so-called influencers with millions of fake bot followers to cover-up how they have fucking destroyed our city!

In reality, this has more to do with damage control than actually attempting to make Vegas a city worthy of visiting again.

Next weekend, LVCVA and R&R Partners plans to fly in hundreds of Social media influencers from around the country who will then flood social media with posts on how great Vegas is again, in an attempt to crowd out sites like mine that have the balls to tell the real story. What they won’t tell you is how LVCVA pays the useless bastards over at R&R Partners $110 million a year as our economy crumbles, our streets turn into a third-world ghetto, and our small business owners shutter their doors.

$110 Million a Year in Tax Payer Dollars to Subsidize Failure…

We have gone from What Happens in Vegas, Stays in Vegas to the new blockbuster campaign…

You can’t make this shit up, we are paying for marketing campaigns telling people how to wear a mask and how to “Be Smart”. Oh yeah, that’s gonna fucking bring the fun back!

So how does R&R Partners Continue to be Awarded Contracts after a Decade of FAILED Campaigns?

How the hell could that be???

As we’ve reported in the past, it’s pretty easy to steal $110 million a year when you have money being funneled directly to corrupt local politicians like former Clark County Commissioner Lawrence Weekly. While Chairman at LVCVA, Weekly helped spend room tax money on $700,000 in alcohol & $85,000 on showgirls!

On top of stealing $110 million of your tax payer dollars every year, and while thousands of local small business owners went bankrupt from the Sisiolak Shutdowns, R&R not only continued to be paid, but they had the nerve to steal over $5 million in CARES Act PPP funds!

UPDATE: We have heard from multiple sources that one of these “influencers” was among the group who assaulted an Uber Driver earlier in the week… does anyone think we should be using tax money to bring people like this to Vegas?

Why would we pay people like this to come to Vegas? This girl assaulted another Uber driver in Hawaii & posted Videos urinating on property at Circa…

Why again are tax payer dollars being used to bring “social media influencers” like this to Vegas?https://t.co/5F3GOXpgBe pic.twitter.com/OSNyW7JRTK