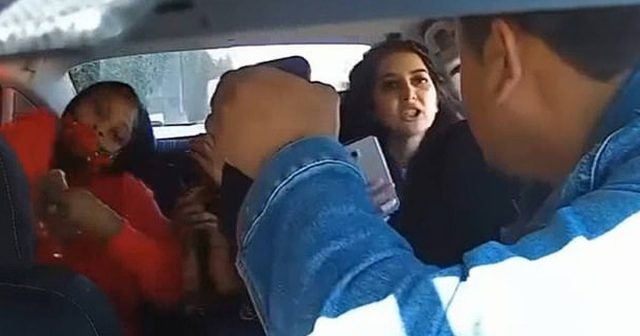 One of the three losers who attacked an Uber Driver earlier in the week in San Francisco has just been arrested in Las Vegas on unrelated changes – I know, shocking that these disgusting pigs have prior records!

Earlier this week a video went viral, showing Uber driver Subhakar Khadka being attacked by three women. At one point, the woman who coughed on the driver grabbed his cellphone from the center dash area and ripped off the facemask he was wearing. Khadka says he was also assaulted and pepper sprayed .

While the media tried reporting this as an attack by Anti-mask activists, Khadka says it was a racially motivated attack that had nothing to do with a mask protest.

Khadka told KPIX he believes that he was subjected to the harassment and racial slurs because he is a South Asian immigrant.

“You guys are animals to treat other human beings like this.”

Odd that our local media is blurring their faces and reporting this as anti-mask activists… guess it doesn’t fit their agenda!https://t.co/zYAKblfv3c pic.twitter.com/T1VQHWwLgc

Another suspect, 24-year-old Arna Kimiai, who goes by the name keepingupwithforeign online, has yet to be arrested but told SFPD through her legal counsel that she would be turning herself in.

She said “That’s why I take Lyft” like Uber is the problem lol
pic.twitter.com/lDkebSQtVa

Is this one of the “Social Media Influencers” LVCVA is paying to promote Vegas?

Multiple sources have told us that Arna Kimiai was one of the so-called Social Media Influencers that Las Vegas Convention and Visitors Authority wanted to use to promote Las Vegas! Kimiai, who is also an escort that goes by the name Ava Zanotti, is an influencer who was a well known trouble maker and criminal that went by the name @keepingupwithforeign online.

Why are we using tax payer dollars to pay people like this to come to Vegas and promote it online?

Update: Once we reported that we were hearing from sources that Arna Kimiai was one of the Social Media Influencers that Las Vegas Convention and Visitors Authority wanted to use to promote Las Vegas, all of her social media accounts were set to private!