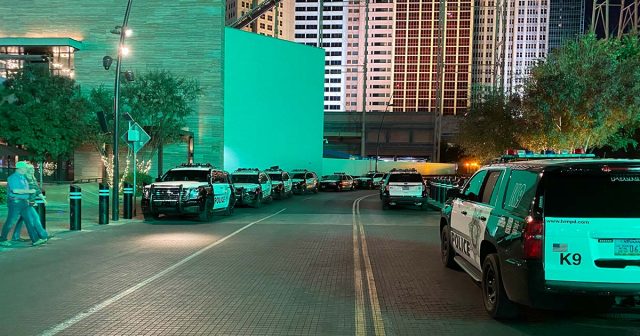 In the last week, we’ve had a murder inside the Rio, a shooting inside Bally’s, a housekeeper killed at Bally’s, a man beaten almost to death for not wearing a mask inside a Las Vegas store, and countless assaults inside Casinos and throughout Las Vegas. With so much crime, one would think that Sheriff Lombardo would be doing everything he can to make Las Vegas a safe place for tourists and locals, I mean he is running for Governor after all so even a small show of force would go a long way.

Lombardo decides to Harass Cowboys instead!

Last night, as we watched people be turned away from the George Strait concert at the T-Mobile arena for not wearing masks, we noticed another very odd thing. Instead of trying to make the Las Vegas strip safe and doing something about the methed out drug addicts and criminals preying on tourists, it seems Lombardo thought intimidating peaceful ranchers and cowboys was the better play.

I mean the local media has been quite upset that these heathens came to Vegas, breathing out air that isn’t filtered by the magic masks, so instead of fighting crime, let’s placate mental illness and the mentally ill voters who want some cowboy heads smashed in for breathing!

Metro is no longer anywhere to be found on Fremont or the Strip. Murders & violence out of control….but Lombardo sends saturation patrols to intimidate cowboys at T-Mobile?

I guess intimidating people into wearing masks is more important than murders & shooting inside casinos? pic.twitter.com/WvRIt4Kwqn

Mask Gestapo kicking people out of George Strait concert for not having masks… pic.twitter.com/6CBxZM27T5

As we covered last week, there are drug addicts, child abusers, and literal sword-wielding criminals preying on people on Fremont Street, but again, Lombardo seems unwilling to do what needs to be done to make our city safe – GO AFTER FUCKING CRIMINALS, not cowboys or people just trying to make a living during this madness!

I guess it shouldn’t be too shocking, this is the guy who helped Steve Sisolak promote the fake Asian Hate Crimes bullshit in Chinatown and then sent saturation patrols into China Town while people were being beat, robbed and murdered on the Las Vegas Strip.