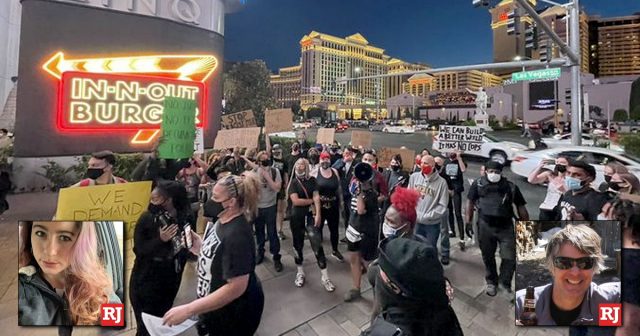 The scumbags in our local media who can’t seem to find a camera crew to cover the mass violence, stabbings, open meth and crack use, vandalism, and homeless encampments on the Las Vegas strip, sent multiple reporters to not only cover BLM protests on the Las Vegas Strip last night, but they openly promoted them and even joined in on the protests.

In preparation for the nationwide chaos that is expected after the trial of Minneapolis police officer Derek Chauvin’s concludes in the coming weeks, BLM and local media propagandists hit the Las Vegas Strip last night hoping to drum up support and push their unhinged propaganda on the public.

They are not journalists, they are activists!

Las Vegas Review Journal Reporter Kevin M. Cannon was so gleeful to be included in the revolution, that the moron actually tweeted out the truth when he gleefully admitted on Twitter that he and his RJ companion had joined the protests! He tweeted “We are now protesting at The Linq.” This is what passes as journalism!

Las Vegas Review Journal Reporter Sabrina Schnur, who are sources say is in bed with a local BLM group that goes by the name of More Than A Hashtag LV, seemed to confirm as much when she promoted key members of the group who routinely retweet her BLM PR reports.

Smith finishes by naming several people who have been killed by Metro, asking protesters to get involved in local cases as much as they care about national cases.

We are all ONE!
We are in this TOGETHER!
Vegas STANDS with #DaunteWright , his family and Minneapolis!
UNTIL these Police are held accountable for their actions we will NOT stop!

Here is one of her friends in the BLM group, showing her support for the propagandists at the RJ:

“I’m running away, don’t shoot.” And “hands up don’t shoot.” A protest is underway on the Las Vegas Strip in response to the shooting of Jorge Gomez, Daunte Wright and Adam Toledo. pic.twitter.com/L6gBJsjfRG

These are not protests, they are designed to kill tourism & keep normal people from coming to Las Vegas… it’s a takeover, & last night the local media from the Review Journal joined the insurrection! https://t.co/A9M3KshRR2 pic.twitter.com/DFxGiUbuCu

The BLM group More Than A Hashtag LV, has also been one of the groups causing trouble for police during the so-called peaceful bike events that we reported on last week.

This isn’t the first time we caught the Las Vegas Review Journal and their reporters openly promoting, lying and covering for BLM

Back in September 2020, when BLM rioted throughout Las Vegas; tried to shutdown traffic; and got in fights, shootings and stabbings throughout the city this is how the RJ and their reporter covered the story.

At 8:30 the group kneeled at Las Vegas Boulevard and Fremont. pic.twitter.com/HN8JxYzAlO

Wow that seems super peaceful, right? Well here is what she didn’t show you…

Here is what we covered that same weekend:

Our daily reminder that as long as your are part of BLM or Antifa & are actively destroying our city you are free from Sisolak’s mask and no mass-gathering mandates… own a small business you’re screwed, destroy our economy you’re treated as a hero! pic.twitter.com/SnWLYcnHZF

And of course that same night, we had BLM criminal rappers having a shootout on the Las Vegas Strip! Remember, the RJ claims BLM was peacefully protesting!

That same night we were blocked by 8New Now Reporter Sasha Loftis after we showed proof that she was giving away tactical staging locations of Las Vegas Metro Police officers who were trying to keep control during one of the most chaotic weekends of the year.

Blocked for pointing out that @8NewsNow reporter was giving away tactical staging locations for metro police officers and putting their lives in danger. Why are you allowing your reporters to jeopardize police lives? pic.twitter.com/thBxVoupMj

These new visitors sure are great… another weekend of fights and shootings on the Las Vegas strip. pic.twitter.com/zGYE96Vivz

Yet another shooting thanks to Sisolak Approved visitors… three shot in drive by shooting at Stage Door pic.twitter.com/aH2NlesMvv

Isn’t it odd that the same local media who claims trump rallies are going to spread COVID are making excuses for and celebrating BLM forcing tourists to walk through their gauntlet… funny how the “pandemic” goes right out the window when BLM is involved! https://t.co/gJyndqRTWv

And then we have the time back in October of 2020, when RJ reporter Sabrina Schnur tried to pretend BLM “protestors” were being run over…

Here’s a video from within the live stream of a car hitting a man, running over another’s foot and almost driving up on the median when protesters stopped in the crosswalk at East Sahara Avenue and the boulevard. Later, the orange car pushes through as well. pic.twitter.com/5EkdgyG3CO

What she failed to mention in her tweet, a tweet that was meant to get more people riled up, was it was a black couple with a small child in the back seat that was simply trying to get away from BLM protestors who had begun attacking cars and had been blocking intersections throughout Las Vegas all night.

This is your local media: They are not journalists, they are activists!