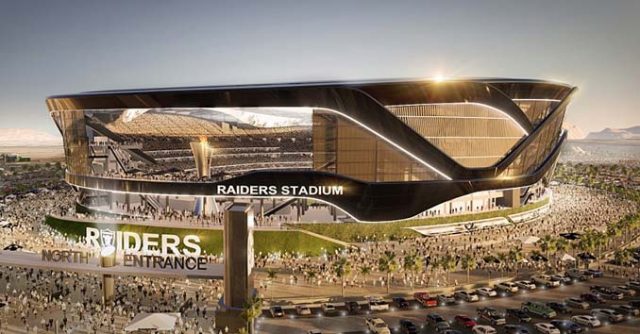 The Oakland Raiders are moving full steam ahead with their plans to relocate the team to Las Vegas. This week Raiders owners filed for three trademarks to the phrase “Las Vegas Raiders”, pushing the move one step closer to reality.

After losing a bid to relocate to Los Angeles, the Raiders have only one year left in their Oakland Stadium. Raiders owner Mark Davis has pledged $500 million towards a new stadium project in Las Vegas, but according to a report from the Southern Nevada Tourism Infrastructure Committee, the stadium could cost a total of $1.9 billion.

The Sands Corporation has indicated it will walk away from the deal if it doesn’t get the $750 million commitment to public investment, which would come in the form of a new room tax.

Critics of the proposed stadium, which include the powerful Las Vegas Culinary Union, claim the NFL and the Sands can afford the stadium project on their own and should not be requesting public funding or any sort of hike in taxes that could affect tourism.

“There’s been a lot of conversation on why are we giving money to billionaires,” said Steve Hill, chairman of the oversight committee and head of the Nevada Governor’s Office of Economic Development. “The public is not making a contribution to a privately owned stadium.”

Clark County Commissioner Steve Sisolak, who has also been a vocal critic of the deal said, “We keep dancing around it but we’re not saying how far the public part would be willing to go.”

Developers are pushing the Southern Nevada Tourism Infrastructure Committee to speed up the process and recommend the project to state lawmakers, who must approve any tax hikes and authorize a stadium board to oversee its operations.

Sands officials are pushing for a special legislative session in September and say delaying action could jeopardize the project.

Despite the high price tag, not to mention no real plans on where the additional funding will come from, the Raiders unveiled plans for a glitzy new stadium right in the heart of Las Vegas.

The Stadium, designed by Manica Architecture, is far from a done deal. While two possible sites have been chosen, The Raiders, who are teaming up with Las Vegas Sands Corp., still have to convince all 32 NFL owners to approve the move.

Las Vegas Raiders on the Strip? While it’s still not guaranteed that we will even get an NFL team, the push for the stadium is moving ahead.

Representatives from Majestic Realty and the Las Vegas Sands casino company updated an oversight committee last Thursday on their plans to build a 65,000-seat domed stadium in Las Vegas. The Developers say they’ve narrowed down their list of possible locations to two pieces of land just south of the Mandalay Bay Hotel complex. They’ve signed a preliminary agreement for their top location — a 62-acre piece of land just west of Interstate 15 — but also cited a secondary option at the Bali Hai Golf Club between the interstate and the Las Vegas Strip.