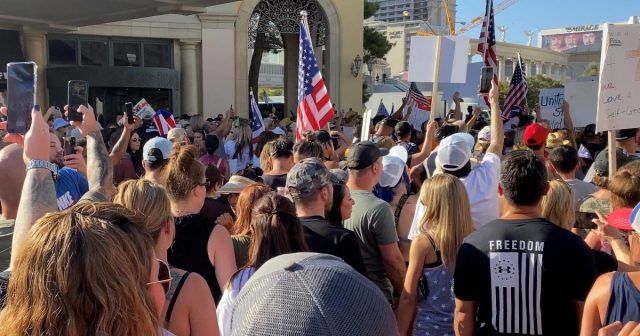 This afternoon, in 110 degree heat, thousands of local residents hit the Las Vegas strip on foot and in trucks to demonstrate against the unconstitutional, business-killing COVID mandates imposed by Governor Steve Sisolak, the Clark County Commission, and the Clark County School District.

The Trucks have now joined in… pic.twitter.com/TuXmqB8Gq8

They want you to believe you are alone!

This is the second march in the last two weeks that attracted thousands of patriotic locals to the Las Vegas strip.

People are fed up with the mandates, and they are sick of being lied to by the local media. Local NBC News Channel 3 decided to lie about the protest, and claimed it was an anti-vaccination protest. It was not, in fact, many fully-vaccinated people and even people who were pro-mask joined the march to protest against the government MANDATES!

Earlier today we exposed 8News Now reporter David Charns for making up a fake story about young COVID patients lining the halls of local hospitals. Later in the day, that same network sent reporters to take pictures of the end of the protest, as people were walking back to their vehicles, to make it look like only a hand full of people showed up.

Earlier in the day, around 800 licensed employees refused to show up to school to protest the mandatory vaccination requirements that are set to be imposed on CCSD employees.