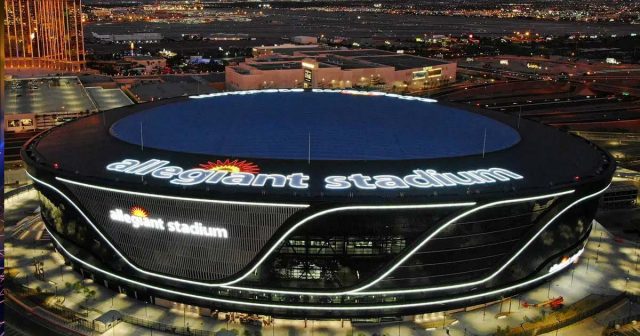 Just hours after Steve Sisolak announced his newest plan to screw our economy and collude with the Casinos and corporate millionaires to ban unvaccinated people from being able to live a normal life, the Las Vegas Raiders announced they are banning all unvaccinated fans from Allegiant Stadium and will require fans at home games to show proof of COVID-19 vaccination.

This is all part of Sisolak’s new plan, where large corporate venues will be able to drop the mask mandate if they promise to ban unvaccinated people from their events and enact vaccine passports.

In a statement on their website, the raiders announced they will be using digital vaccine passports through CLEAR’s free mobile app and Health Pass feature to screen fans before they enter.

The policy will take effect for the first regular season home game, September 13 against the Baltimore Ravens on Monday Night Football.  The Raiders are the first team in the National Football League to announce a vaccine/no mask policy.

The Raiders implemented the change in accord with a new Emergency Directive from Nevada Governor Steve Sisolak regarding large events. “Health and safety has always been our number one priority,” said Raiders owner Mark Davis. “After consultation with Governor Sisolak and other community leaders, this policy ensures that we will be able to operate at full capacity without masks for fully vaccinated fans for the entire season,” Davis explained.

The Raiders will offer the opportunity for fans to receive vaccinations on site at Allegiant Stadium prior to Raiders home games, permitting newly vaccinated fans to enter wearing a mask.

The Raiders announced a policy requiring all full-time employees on the business and football staffs of the organization to be vaccinated in May. Stadium management company ASM and stadium concessionaire Levy also have implemented mandatory vaccinations for all full-time staff at Allegiant Stadium.

The Raiders will hold a press conference at 12:00 noon on August 17th at Allegiant Stadium to announce details of the program and introduce CLEAR representatives who will discuss the verification process. Raiders season ticketholders will receive an email with additional information and instructions.

According to our sources, Sisolak, Jim Murren, MGM Resorts and Raider’s owner Mark Davis all agreed to the coordinated attack on unvaccinated Nevadans shortly before the mask mandate went into effect last month. Our sources tell us even if COVID cases went to zero, Sisolak will not lift the mask mandate again because he needs the leverage to force small business owners to enact the digital vaccine passports next.

Over the next couple of weeks, a number of large conventions, large venues, and possibly even a major Strip Casino corporation are set to announce similar policies in the lead up to Sisolak promising small business owners that they can drop the mask mandate if the ban unvaccinated people from their businesses. This morning, MGM got Sisolak’s plan rolling by Requiring Mandatory COVID Vaccinations for all New Hires and Salaried Employees.

Sisolak Laughs at the prospect of banning unvaccinated from living life!

In his dystopian press conference earlier today, the psychotic, wannabe dictator laughed in amusement at his plan to ban unvaccinated people from living a normal life, laughing and telling reporters that this will force people to get the vaccine if they want to attend events.

He then encouraged small businesses to enact vaccine passports and warned that he would use law enforcement to go after anyone who tried to use fake vaccine cards.

RAIDERS ARE GOING TO BAN UNVACCAINTED, WHILE THEY ENCOURAGE GHETTO SCUM TO RIOT IN THIER STADIUMS

For weeks, the local Las Vegas media has been ignoring large-scale violence and riots inside of Allegiant Stadium. Earlier this month, soccer fans rioted throughout the stadium, a story that went completely ignored by the Las Vegas media.

I guess this is why you pay extra for luxury VIP seating at Allegiant Stadium? pic.twitter.com/vu4PPBJ9Cx

And at last weekend’s season opener, multiple fights went unreported by our media.

Those Raiders fans sure are classy…

Guess the media forgot to mention the violence and fights during the First Raiders game… great idea bringing these scumbags to our city! pic.twitter.com/HoEc038T3X

The Raiders Robbed Las Vegas In America’s Worst Stadium Deal Now they Want to ban the people who paid for it!

At $750 million in taxpayer dollars, the boondoggle of a deal was the largest direct public subsidy for a stadium ever granted, and Clark County is now struggling to pay the bill thanks to the Sisolak shutdowns that pretty much killed room tax revenue. Now, that we are banning half the city from attending games, it seems local taxpayers are going to be screwed as tourism tax revenue can no longer be counted on to pay for the stadium scam.