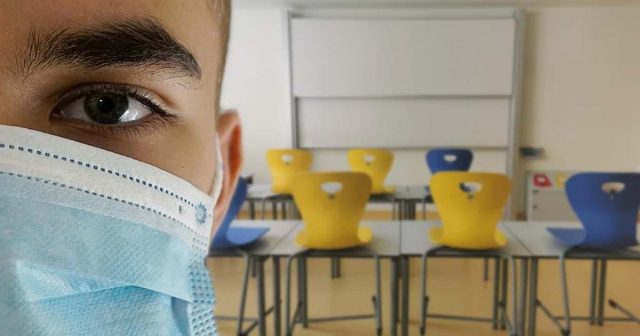 A mother of a 9-year-old student at Carolyn S Reedom Elementary School in Las Vegas contacted us earlier this week with a horrific story of how kids were being humiliated by their teacher who was upset when they didn’t wear their masks properly. To teach them a lesson, she began taping their masks to their face to humiliate them in front of the class.

On Tuesday, the mother was informed by school administrators that her son showed up at the office with a mask taped to his face. When the office staff asked her son about the tape on his face, he told them that his teacher, who was upset that he didn’t pull up his mask after taking a drink of water, had taped it to his face. “She physically taped his mask to his face in the front of entire class”, his mother told us. “She had taped it all the way up to his forehead.”

Thankfully, her son was called down to the office to pick up homework, otherwise his parents would have never known this was going on. When he walked into the office, the staff observed the tape on his face and called the principal who then went to the classroom and found another student who also had his mask taped on his face by the teacher. In investigating the matter, it was revealed that the teacher had done this to five other students and had been doing it since the school year started – all of the students thought it was normal, and never told their parents what was happening.

The mother of the nine-year-old, who at the moment doesn’t want to be identified, told us that her son thought “it was normal” as well. Can you believe we have fallen this far off the deep end, that not only are these kids forced to wear these masks all day, but they have been convinced that behavior like this is normal?

Even more upsetting is after it came out, the mother tells us that her child was in fear that the teacher would be mad at him and punish him for telling on her. Luckily, the teacher has been removed from the classroom, but sadly, she is still allowed to teach at other CCSD schools.

The mother has asked to remain anonymous and asked us not to share photos of her child, but I can confirm that she sent us images from the school’s security cameras of her child with his mask taped to his face, she also provided documentation and reports from the school, and she provided us with the battery police report that she filed this morning with the Clark County School District Police Department.

According to the mother and the school’s own report, this happened to at least five other students. If you have a 4th grade child at Carolyn S Reedom Elementary School they may have been abused by this sick and twisted “teacher” and you should probably have a talk with your child about what was happening in class.

UPDATE – 9/4/21: Since this article went live, we have been attacked by unhinged pro-mask parents and CCSD teachers, claiming that we are lying. Well, it looks like the local mainstream media has started to pick up on the story, and CCSD has admitted that the story is true!

NEW: A Las Vegas mom says a CCSD substitute teacher taped masks to the faces of multiple students at a local elementary school. Now, she wants the substitute teacher to be held accountable and to never educate children again.
READ MORE: https://t.co/P08rmY0FZL pic.twitter.com/PwdaVNkBGK