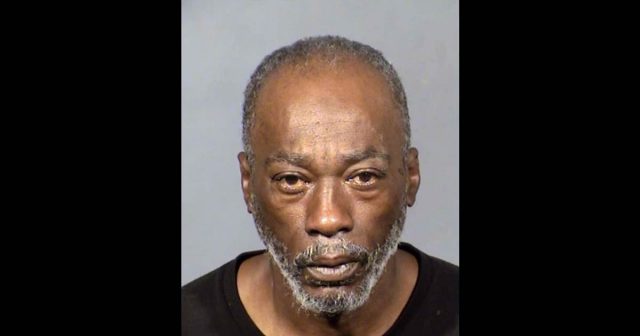 In what seems to be an almost daily occurrence now, another Las Vegas Casino employee was brutally attacked and stabbed inside a Las Vegas Strip Casino. Our sources are telling us that a homeless drug addict made his way into the Paris Hotel and Casino through an employee walkway where he then followed an employee into an employee bathroom and attempted to kill him.

According to Las Vegas Metropolitan Police, the victim was told to get down on his knees as the homeless addict pulled out a butcher knife and started swinging it towards the victim. The suspect was struck in the head and the knife hit right near his left eyebrow. The victim then grabbed the homeless man and attempted to stop the attack.

A fight began and that spilled out into the hallway where other Paris employees were able to help and grab the knife away.

According to Las Vegas Metro,  Kirkland Oates, 55, was arrested on several felony charges including attempted murder, assault, and kidnapping. They say surveillance video shows Oates following a Paris employee into the bathroom.

Before the attack, Oates was captured multiple times by hotel security cameras but was able to make his way into several restricted areas of the casino. He was waived in by security through an employee entrance, despite having no id. He then followed a chef into her workstation but was scared off by other restaurant staff.

Video then shows Oates approach a table where employee Jesus Rodriquez was working. In front of Rodriguez, another chef had laid out his cutlery, which included a butcher knife. When the chef stepped away, Oates grabbed the knife. Oates started banging the handle on the table asking Rodriguez if the black knife bag was his.

Police say Rodriguez then grabbed his own knife as he felt in fear for his life. Oates pointed the knife at Rodriguez before turning away. Oates then went downstairs where he found a Paris employee waiting to clock in. Once the man clocked in, surveillance video showed Oates follow him into the bathroom where the stabbing occurred.

The victim was taken to Sunrise Hospital and treated for several stab wounds.

Las Vegas Metro and the Local Government have Lost Control because they refuse to do anything about the homeless drug addicts on the strip.

Over the last couple of weeks, we’ve had a murder inside the Rio, a shooting inside Bally’s, a housekeeper killed at Bally’s, a man beaten almost to death for not wearing a mask inside a Las Vegas store, and countless assaults inside Casinos and throughout Las Vegas.