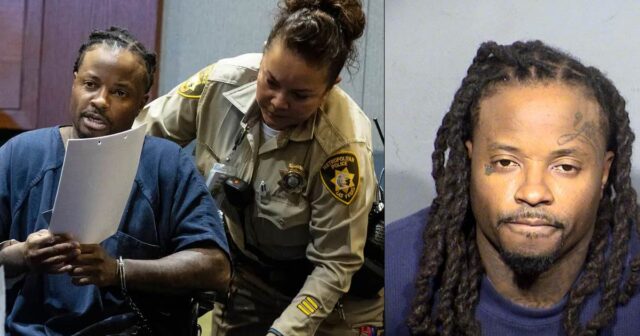 According to court records, the scumbag who shot 14 people at a so-called hookah lounge – which was actually an illegal black-only nightclub – was previously arrested at least 82 times and had 9 felony convictions on his record.

While the media wants to bury this case as fast as they can because it shows the utter ridiculousness of their nightly reporting on “white privilege” and racism, the fact is this is what racism actually looks like – a system that allows black criminals on the street no matter how many times they rape, rob, assault and kill.

82 arrests and 9 prior felony convictions

The suspect, identified as Lee Wilson, 44, was arrested Tuesday and booked into the Clark County Detention Center on one count of open murder and 12 counts of attempted murder, police said. Wilson’s prior record included not only 82 arrests, but a lengthy criminal background of violence against people and animals that includes charges of drug possession, domestic violence, attempted murder, killing an animal, conspiracy to commit murder, burglary, and discharging a firearm into a vehicle.

This is what Black Privilege looks like, and why our streets are so Dangerous thanks to the Democrat Party who chooses to enslave the black community!

Despite 82 arrests and 9 prior felony convictions, Wilson somehow managed to spend more time on the streets robbing, killing, and throwing the black communities he preyed on into chaos than spending actual time in jail for his crimes.

These are the people the Democrat’s want out on the streets!

Within hours of the news breaking, we were one of the only news outlets to even report on the color of the shooter, the so-called victim’s color, and the color of the people in the club. Las Vegas Metropolitan police and the entire local Las Vegas media refused to even give a description of the shooter or admit that this was known as a blacks-only nightclub that was illegally operating in a shopping center known for rampant crime, drug sales, human trafficking, and prostitution.

And speaking of the so-called “victim”.

While the media and the democrat party in Nevada attend more fake vigils, what most won’t tell you is that the so-called victim was no saint himself. In fact, as we reported the day this happened, he is a well-known gang member with a long history of violence. In fact, these criminals bounce in and out of court so often, that the shooter’s public defender will probably have to recuse himself because the man who died after the shooting — 33-year-old Demetreus Beard — was also defended by this lawyer in prior criminal cases.

As as for this Blacks-only nightclub, Manny’s Glo Afterdark, it was allowed to operate – just like most of the businesses in the Commercial Center District — without licenses and without a liquor license. Because again, this is what Black Privilege looks like!