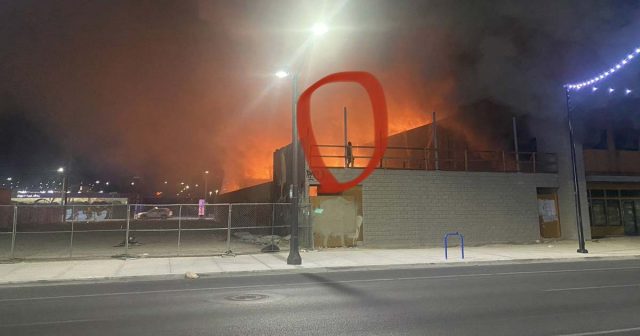 In what looks like the latest fire started by homeless drug addicts in Las Vegas, a suspected arsonist was photographed on the roof overlooking the warehouse fire in Downtown Las Vegas on Sunday.

The fire was reported shortly after 8 pm on Sunday, at a two-story warehouse in the Downtown Arts District at 1026 Main St. The warehouse was known as a hotspot for homeless drug addicts, and the front door was often left open for homeless squatters to use the building.

Photos like this helps with our investigation, anytime you have photos and can pass them on, please do so & THANK YOU. It’s not the person which is more interesting, it’s the fire. This will help investigators on where to look for the start of the fire. pic.twitter.com/RheiumliEa

We have documented the homeless problems throughout downtown Las Vegas and the Arts District for years, but the City of Las Vegas refuses to crack down on these bums, even after they torch building after building.

This is the Downtown Las Vegas, in many areas bums have taken over entire blocks in front of businesses & homes… tents, addicts, and filth! pic.twitter.com/wggkS7pGBB

Welcome to First Friday in Downtown Las Vegas where @CityOfLasVegas officials push experimental vaccinations on public but allow disease ridden bums to shoot up, defecate on sidewalks & setup tent cities just a couple feet down the road — all in the name of “health and safety” pic.twitter.com/NjxUBS8scP

How many buildings have to burn before the city cracks down on these addicts?

Back in June, the Bunkhouse Saloon in downtown Las Vegas was looted and set on fire by homeless drug addicts.

Last December, more than 75 firefighters and 30 pieces of equipment were needed to put out a warehouse fire near the train tracks off of Industrial, after homeless addicts who were allowed to setup encampments along the tracks set the building on fire.

2AM UPDATE: Bulk of fire is out, still several hotspots still burning, will be 1-2 more hours to make sure all is completely out. INDUSTRIAL RD CLOSED Chicago Ave to Boston Ave, all lanes closed. Damage estimated at $1 million so far. Cause: Homeless camp set up MORE >>>>> pic.twitter.com/oaaKC4Vgiq

And here are just a few more of the fires that were caused by homeless encampments that the city of Las Vegas refuses to do anything about.

At approx 2:30 fire dispatchers received several calls for smoke in the area of Main St/Owens Ave, possibly a bldg on fire. It was actually trash from a homeless camp next to the RXR bridge on W. Owens Av. E201,106,T1,B1 quickly put the fire out, no dmg to bldgs. #PIO1NEWS pic.twitter.com/YhSlNKkf2J

Heavy plume of smoke coming from a storm drain on Ione Road near Eastern Ave. where a witness said a homeless person set a fire in the drainage ditch below. #vegas pic.twitter.com/uBnHNmalwf

A fire that damaged a business on W. Bonanza Rd Thursday AM may have started outside the building by a homeless woman trying to stay warm using a candle. She is in the burn unit at UMC, unable to talk to fire investigators because of her condition. The fire caused $100Kdmg. pic.twitter.com/oUIKaWgZsy

Quick work by @ClarkCountyFD and @HendFireDept firefighters brought a 2 acre brush fire at Sunset Park in Las #Vegas under control. The fire was started by homeless people. About 50 firefighters were on scene for about 4 hours. At one point, the fire did threaten some structures. pic.twitter.com/mUY9zVH1tG