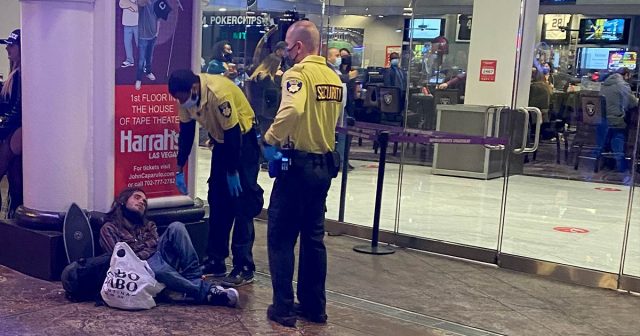 Over the weekend, we yet again witnessed the complete breakdown of law and order on the Las Vegas Strip.

Last week we reported on the mass homeless camps now popping up throughout the Las Vegas Strip and downtown corridors, including homeless people now taking up residence in the actual doorways of Las Vegas Strip Casinos, making tourists have to physically step over them to gain entrance to Strip resorts.

It was almost beyond comprehensions how the CEOs and security at these mega-resorts could allow their guests to be exposed to this safety and health hazard, while proudly posting signage everywhere claiming to have your health in mind, as they scream at you for not pulling up the compliance mask in between sips of your drink. Never mind the fact that you just had to step over someone with hepatitis who just shit his pants, nope you better pull up the mask so the fairytale virus doesn’t get you!

Bums OD in the Doorway of Harrah’s Las Vegas

It’s actually not hard to find them sprawled out all over the strip, either overdosing on heroin or laying in a puddle of their own piss and shit – the smell sometimes is overwhelming! But when it gets so bad that they are now sleeping, fighting, shooting up and overdosing in the doorways of billion dollar mega-resorts – WE HAVE A HUGE FUCKING PROBLEM!

Sadly, the casinos don’t seem to care. In fact, security was more concerned with us filming what was going on than actually doing anything about the problem.

After getting a shot of tax-payer bought Narcan from Clark County Fire and Rescue, and then refusing to go to the hospital after he sprang back to life, bum #1 scurried off into the night. Drug addict #2 then proceeded to try to fight Harrah’s security, who had to retreat into the safety of the Casino. After about 15 minutes, Metro finally shows up, and as usual, no arrests are made, and the drug addict bums are allowed to wander down the strip harassing more tourists as they find their next shoot up spot or place to shit on the sidewalk.

When is the public going to start demanding Clark County officials do something about the problem, instead of wasting our tax dollars on renaming an airport? When will Casino CEOs stop allowing Sisolak, Andrew Pascal and Jim Murren to use the so-called pandemic to crash our city for their financial gain? When will locals take off the compliance masks and call these mother fuckers on their bluff? It’s time for small business owners to unite and stop letting them destroy our town!

Now we have mentally-ill “homeless” drug addicts fighting, shooting up, and OD’ing in the doorways of Strip Casinos —