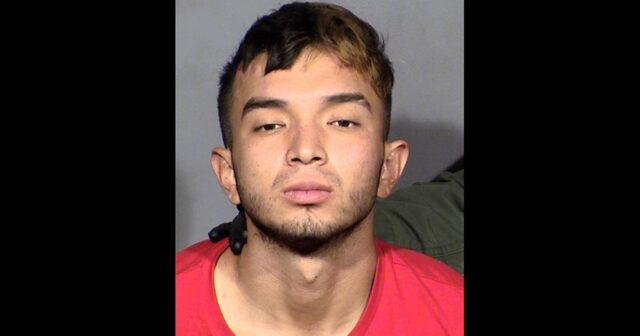 On Wednesday, Las Vegas Metropolitan Police failed to stop what we are being told is another illegal alien from attempting to kill tourists multiple times on the Las Vegas Strip.

Wilson Reyes-Gonzales repeatedly eluded police as witnesses say he drove on and around the Las Vegas Strip, tailgating vehicles, harassing tourists, and crashing through the sidewalks as he terrorized tourists at multiple casino properties.

According to an arrest report from the Las Vegas Metropolitan Police Department, Wilson Reyes-Gonzales, initially fled from police after he was observed tailgating a taxicab near Linq Lane and Winnick Avenue. Police say that Reyes-Gonzales refused verbal commands and continued to follow the taxi.

Police then attempted to block the vehicle driven by Reyes-Gonzales, but he easily maneuvered around the police and began driving up onto sidewalks “in a highly populated tourist destination” and continued to avoid authorities.

After escaping police, he continued to drive recklessly around the Las Vegas strip, until he was again observed by police, this time flying up behind another driver in a black Dodge Charger. Police wrote in the report that he again was able to flee from the police, this time returning to the LINQ where he began driving recklessly through the parking garage, where he was able to crash through a security gate at the LINQ.

He then escaped the police again and attempted to get back onto the Las Vegas Strip. Police tried to stop Reyes-Gonzales as he drove through the valet at Bally’s. He then jumped a curb and nearly hit a tourist who was walking on the sidewalk with a stroller and a police officer who was standing at the back of his patrol vehicle on Flamingo Road.

Police say he then took off down Flamingo eastbound on Flamingo through Koval, where police say they then finally conducted a precision immobilization technique (PIT) on the man’s vehicle. Then for over 30 minutes, Wilson Reyes-Gonzales attempted to gas his car at the police, spinning his tires out as they surrounded the vehicle. The report indicates that officers continued to deliver verbal commands in Spanish and English for approximately 30 minutes without any response from the suspect.

Police said in the report that after this, the man’s vehicle caught fire, and officers were forced to make entry and remove Reyes-Gonzales from the driver’s seat of the car. According to the report, during the incident, one of LVMPD’s marked patrol units caught on fire, which they said caused substantial damage to the vehicle’s front end.