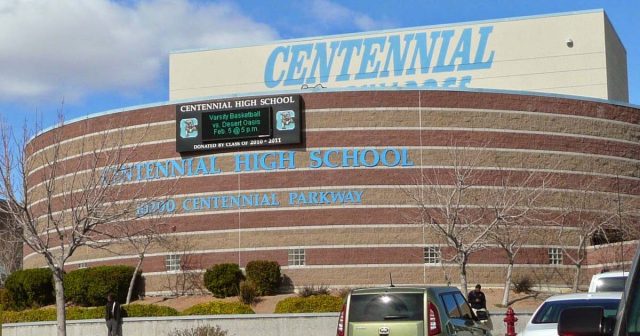 The mother of a Centennial High School student is trying to raise awareness to a growing problem in Las Vegas, White students being targeted by Black Gangs in vicious hate crimes.

Earlier this week, a 16-year-old was suspended from Centennial High School for a fight in the bathroom; unfortunately, it was the victim who the Clark County School District (CCSD) targeted for punishment instead of the 20 black students who have been systematically targeting white students with violence.

“The kid throws my son on the floor and is stomping him all in the head,” said Sherry, the mother of one victim. She told 3 NEWS — the only Las Vegas news station to even cover the story — that she did not want to be identified because she feared what would happen to her and her son.

“His good friend told me they target white kids only because they fell that they’re weak,” Sherry said.

CCSD has tried to claim this is a simple bullying problem, instead of calling it what it is: A HATE CRIME. They released the following statement

“School administration and school police are aware of the matter and appropriate action will be taken. CCSD investigates every reported case of bullying and takes appropriate action. We are unable to discuss individual student disciplinary matters due to privacy laws. However, in general, students can face administrative disciplinary action at school or be referred to law enforcement for possible criminal prosecution depending on the severity of the matter. Law enforcement has been involved and as they investigate the matter, we strongly encourage students and members of the community not to share footage of this incident or any other student fights. Showing this video serves no purpose other than to further ridicule and embarrass the victim and embolden bullies. Additionally, per state law, students can face discipline for knowingly and willfully transmitting or distributing video/images of bullying with the intent to encourage, further, or promote bullying. Any student who captures photos or video of an assault on-campus, off-campus, on a bus or during a school activity should immediately turn the footage over to a teacher, school administrator or police. We investigate and address all concerns of bullying.”

CCSD Covers up Crimes Against Whites and Refuses to Suspend Minority Students!

In 2013, CCSD changed their disciplinary policies on the suspension and expulsion of minority students. Instead of holding these kids accountable for their crimes inside Las Vegas schools, they decided to ignore the problem because suspending them was somehow racist.

The district changed protocols to reduce the overall number of suspensions and expulsions of minority students, limiting when a principal can recommend expelling a minority.

Are Minorities in Vegas Schools rewarded for causing trouble?

You really can’t make this stuff up. Bonanza High School and Cheyenne High School actually rewards minorities who commit crimes instead of suspending them!

According to the Review Journal, instead of punishing minorities who are causing problems they reward them with therapy dogs, treadmills, and art supplies.

At Bonanza, a classroom across from the main office is outfitted with a treadmill, a couch and ample art supplies and board games. Jermone Riley, the school’s behavioral strategist, wanted it full of ways to help kids blow off steam and avoid confrontation.

In Clark County, incidents involving student-to-student violence jumped from 3,781 in 2013 to 6,227 last year. Student violence against teachers and staff increased from 178 to 647 incidents during that same time period.

Eldorado High School Principal David Wilson admitted that the spike in violence was due to what he calls a “failed social experiment.”

The Office for Civil Rights released a report in 2012 showing that black students were three times more likely to be suspended or expelled than white students. A year later, in 2013, a civil rights-related complaint was filed against the school district, Superintendent Pat Skorkowsky said.

Wanting to create a more equitable environment and avoid costly punitive measures, the district made its expulsion criteria stricter, Skorkowsky said. But he acknowledged the discipline system may need some tweaks given the increasing level of violence within schools.

“We have to rethink that piece yet again to try to figure out how can we provide an education to those students who have a right to it while keeping our campuses safe at the same time,” he said. “That is a huge challenge.”

Just a small look at your local Las Vegas Schools: Thanks to CCSD!