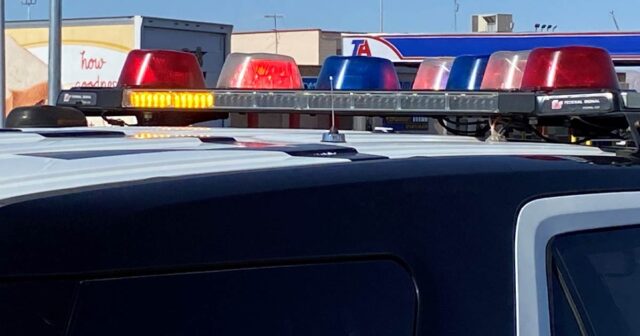 While Joe Lombardo diverts hundreds of officers to the Las Vegas Strip to protect the NFL and pretend he is keeping the city safe, chaos reigns supreme throughout the rest of the city.

Las Vegas police are investigating a shooting that happened around 3:56 p.m near the intersection of Charleston and Decatur after two men apparently decided to have a mid-afternoon shootout in the middle of traffic.

Police say one man was found with multiple gunshot wounds near the intersection. The man was taken to University Medical Center Trauma where they died from their wounds.

The other shooter fled the scene and is currently loose somewhere in Las Vegas.

Charleston Blvd and Decatur Blvd, Alpine and Brush, and Decatur and Brush are all closed as homicide units investigate the scene.

The victim has been pronounced deceased. Homicide investigators will be on scene for the next few hours. Watch for responding emergency vehicles and continue to avoid the area. https://t.co/ViGY2fyWkK

Sadly, these type of events are now a daily occurrence in Las Vegas. While the media showcases the NFL draft today, what they aren’t telling you is a bubble has been artificially created around the draft site, to temporarily keep the homeless meth addicts and street gangs away from the national cameras.

Over the last couple of months, we’ve had an off-duty cop killed by a homeless addict, a shooting inside Downtown Grand, a mass shooting at an illegal blacks-only club, a murder inside the Rio, a shooting inside Bally’s, a housekeeper killed at Bally’s, a man beaten almost to death for not wearing a mask inside a Las Vegas store, a man stabbed by a homeless man inside the Paris Casino, a man shot 11 times by a homeless addict in Chinatown, and countless assaults inside Casinos and throughout Las Vegas.