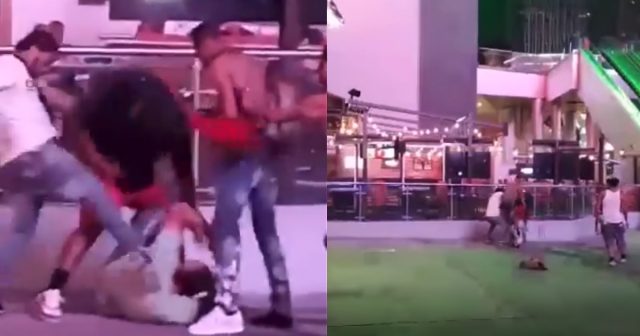 Last weekend a tourist was brutally beat and robbed outside of Planet Hollywood on the Las Vegas Strip, in what has become an almost nightly occurrence on the Strip.

The man, who was visiting from Arizona, was brutally beaten by a gang of at least 4 thugs who after beating him stole his backpack, iPad and Macbook. He suffered a Concussion, bruised ribs and an enlarged spleen as a result of the attack.

A nightly occurrence on the Las Vegas Strip

Sadly, this is not an isolated incident. In fact, in a Facebook post about the attack, the victim says Las Vega Metro police told him this is part of a string of attacks where gang members are targeting tourists with beatdown-style robbery attacks. We can confirm this, based on the dozens of people who have anonymously contacted us over the last couple months, telling us they had just been robbed and beat either on the Las Vegas Strip or inside of a Las Vegas Strip casino.

In fact, a number of our sources who work as security on the Las Vegas Strip say they feel helpless, as upper management has allowed known criminals and homeless addicts to have free reign of their hotels, out of fear of being labeled racist for kicking them out. Other security officers have told us that when they do try to call Metro, no one ever shows up.

During our 15 months of reporting on the chaos caused by the Sisolak shutdowns, we have personally witnessed these gangs and homeless addicts stalking victims inside of billion-dollar hotels as security and management stood by and did nothing to prevent tourists from being harmed.

Is this what they mean when they say “Vegas is Back”?

Keep in mind, when you see that term being used on social media by local “journalists” and local bloggers, they are straight up lying to you, and they know it. The fact is, and I won’t name any names, many of the so-called local Vegas bloggers are PAID by certain casinos to push certain narratives — others are given loads of comps and free shit to toe the line! They are bought and paid, and are afraid to stop getting invites to events, free drinks, meals and rooms!

The fact is, Las Vegas will not “be back” until: