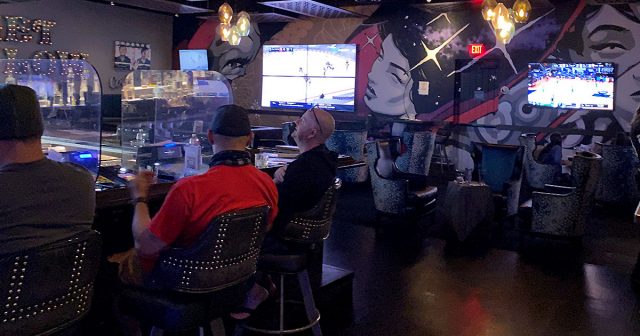 For over 6 months now, we have been called conspiracy theorists for reporting on the coming Strip-Casino sponsored vaccination programs for event attendees and programs that will force hospitality workers to take the COVID Vaccinations. Last week, we reported on how the Gaming Control Board was threatening smaller casinos to force their employees to take the shot, or risk being bankrupted — telling them that they would keep limited capacity limits in place, indefinitely.

Today, we learned that bar owners throughout the Las Vegas Valley are now being targeted as well by Governor Steve Sisolak, Jim Murren, and their henchmen at the Gaming Control Board. Local bar owners are being threatened that they need to force their employees to take the shot or risk losing their businesses.

In the memo, which can be read here, the Gaming Control Board threatens gaming establishments, including small bars throughout the valley, that if they don’t implement vaccination programs for their employees, the gaming control board will not increase their capacity limits. They told bar owners, “Prepare to account to the Board on your company’s vaccination efforts if you seek increased gaming floor occupancy.”

Gaming Control Board Threatens Bar Owners, Vaccinate your employees or lose your license!

They then move from threatening to bankrupt the small business owners by limiting capacity limits indefinitely, to outright telling them they could lose their gaming license altogether.

Licensed gaming is a matter reserved to the states within the meaning of the Tenth Amendment to the United States Constitution. “Within this context, we find no room for federally protected constitutional rights. This distinctively stated problem is to be governed, controlled and regulated by the state legislature and, to the extent the legislature decrees, by the Nevada Constitution.” Rosenthal, 93 Nev. At 44-55, 559 P.2d at 836.

The Board will take action against those that place short-term gain in violation of current Emergency Directives or Board Health and Safety Standards above the well-being of its workforce.

None of this is about Health and Safety, it’s about Control

The gaming board claims they can mandate vaccination programs by claiming they have the power to regulate “the public health, safety, morals, good order, and general welfare” within the state’s gaming establishments.

Central to the Nevada Gaming Control Board’s and Nevada Gaming Commission’s mandate to strictly regulate the gaming industry are the public policy declarations contained in NRS 463.0129, including the charge that gaming be conducted in a manner that “protect[s] the public health, safety, morals, good order, and general welfare of the inhabitants of the state . . . .”

If this is true, and they are in fact concerned about “the public health, safety, morals, good order, and general welfare” within the state’s gaming establishments, why are Las Vegas Strip Casinos conglomerates like Wynn, MGM, and Caesars Entertainment not being punished for allowing mass violence, riots, stabbings and even murders inside their casinos over the last year?

You can’t walk into a Caesars Entertainment resort without stepping over a mentally ill bum who is overdosing in their doorways, but I guess the Gaming Control Board can overlook this threat to our general welfare…

Oddly, the Gaming Control Board doesn’t seem concerned with the nightly violence inside MGM resorts. Maybe it’s just us, but this seems to be a threat to MGM guest’s health and safety….

If any of this was about public health, wouldn’t the Governor and the Gaming Control Board be equally as concerned about the murders and the mass-violence on the strip?

Of course we know this is all about taking control; it’s all being done to help Sisolak’s friends like Jim Murren bankrupt his competition and buy them for pennies on the dollar and Andrew Pascal get rich off of the shut downs he helped push with the COVID tracing App.