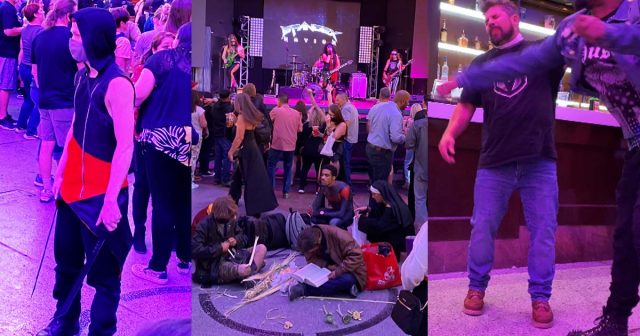 Most locals don’t even bother to make their way downtown onto Fremont anymore, because they know the utter shit show and dangers that await them. From government-sponsored child exploitation on full view to meth-smoking drug addicts blowing meth smoke into a crowd of unsuspecting tourists to the bizarre system of government-sponsored circles where they allow mentally ill addicts and dangerous criminals to prey on the public, Fremont Street is not only beyond broken it’s downright dangerous.

Back in 2015, the City of Las Vegas and Mayor Carolyn Goodman teamed up with the American Civil Liberties Union to pass one of the most bizarre city ordinances we can think of, a system that allows so-called street performers (degenerate homeless bums who scream at people to give them money) to register with the city government to stand in assigned circles throughout Fremont Street.

According to the city, the new ordinance, an amendment to LVMC 11.68, was created to “ease congestion and assure public safety along the busy Fremont Street Experience pedestrian mall.” Sadly, it has not only made the situation worse, but it has set up nightly confrontations with violent homeless drug addicts; criminals, and panhandlers who the city not only allows but sponsors to take up these bizarre circles; and small children who are being exploited by their parents and made to perform in the sea of meth and pot smoke.

Local Government Propagandist Scott Roeben, who runs the casino/government-sponsored website Vital Vegas, helped the city push the bizarre program in a series of articles for the Fremont Street Experience. Roebon claimed the ordinance would make the Fremont Street Experience “a safe, enjoyable destination for the millions of people who visit downtown Las Vegas each year.”

In reality, it’s made Fremont Street a dangerous hive of addicts, criminals, and people seeking to exploit children and the mentally ill.

After registering with the city of Las Vegas, where you can do so completely anonymously, drug addicts, pushers, criminals, panhandlers, and parents who force their three-year-old children to perform at 1 AM, are assigned a circle where they can pretend to perform, or as in most cases, harass and assault unsuspecting tourists who accidentally go anywhere near their government-sponsored circle.

In the most bizarre move, which either screams complete incompetence at best or the government trying to provoke violent reactions at the worst, many of these circles are placed either in the line of pedestrian traffic, or even worse, center stage where hundreds of not-so sober tourists stand to watch the nightly free concerts.

What happens then, is tourists who are here to have a good time, start dancing, have no idea what these circles are, dance into one while trying to enjoy live music, and are quickly assaulted by some screaming drug addict nut case, some of whom come fully armed with weaponry – because you know the Ninja street performer needs to have his city government-sponsored, full-size Katana swords.

Why is the City of Las Vegas Sponsoring Child Exploitation?

There’s a curfew for unaccompanied children under the age of 18, supposedly it runs Friday and Saturday, 9:00 p.m. to 5:00 a.m. That curfew is rarely enforced; in fact, Las Vegas Metropolitan Police are almost nowhere to be found on Fremont Street – it seems Sheriff Joe Lombardo is too busy running for Governor to be bothered with cleaning up what should be one of our city’s greatest assets.

While the unenforced curfew for unaccompanied minors exists, the City of Las Vegas has no problem allowing three-year-olds to be forced to perform in their Government Sponsored performance circles – often among a sea of pot and meth smoke, just feet away from bars full of drunken revelers.

Fremont Street could be great; in fact, it could be one of the shining jewels of tourism for our city. Sadly, it’s become a place where the lowest common denominator seem to multiply nightly. Instead of being able to enjoy the live music, you have to watch your back at all times or else you could become the latest victim of the City of Las Vegas created shit show!

Follower sent us this from Fremont Street…

Another weekend of fights, chaos and violence. pic.twitter.com/9ZBwAT4I7z

Las Vegas media forced to finally cover an actual crime story after accidentally catching it live on TV…. yet the latest daily ghetto fight followed by another thug pulling a gun on people down on Fremont Street today… https://t.co/2WJqy0LPAC

The City of Las Vegas and Sisolak have turned Vegas into the Ghetto… sadly it’s no longer safe to walk on Fremont Strest or the Strip without being assaulted by ghetto trash because the city is to busy harassing business over masks and catering to criminals. pic.twitter.com/PYxp17gZwi