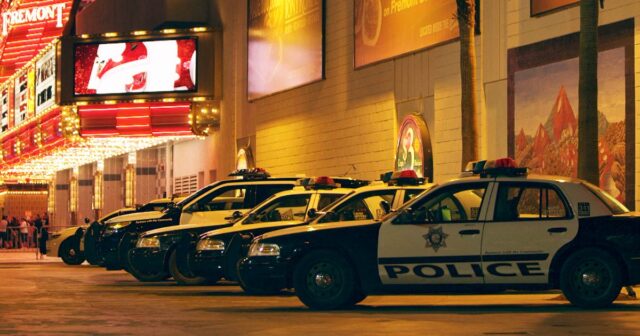 We have learned that the shooter in last week’s Fremont Street shooting was 16-year-old, Ruben Robles. Our sources tell us that Robles was well known to police and was previously charged with multiple felonies. But, unfortunately, like so many criminals in Las Vegas, his charges were dismissed by our useless democrat Clark County District Attorney, Steve Wolfson.

On the night Robles shot and killed Raymond Renova, and shot another innocent bystander, he should have been in a jail cell. Instead, he was again released on bail by our useless Clark County District Attorney while awaiting sentencing on a separate case. Ruben Robles is now facing one count of murder, attempted murder, and carrying a concealed gun without a permit.

When @GovSisolak brags about these new visitors he’s bringing to Las Vegas, to fix the economy he broke, this is who he’s talking about….

Why does democrat Clark County District Attorney Steve Wolfson keep letting killers out on the streets?

Sadly, this isn’t the first time a felon has been allowed to roam the streets, let out of jail by our POS Clark County District Attorney, Steve Wolfson. As we reported back in May, the mass shooter who shot up an illegal blacks only club in Las Vegas had a shocking 82+ prior arrests and 9 Felonies, but was somehow let out on the streets to commit even more crimes.

Even after being arrested for the brutal mass shooting at the black-only Hookah lounge, 9-time felon Lee Wilson was prosecutors accepted a deal that will see the killer serve only 21 to 54 months in prison — he will then be back out on the streets to kill again.

How exactly was a group of teenagers allowed to roam in and out of Fremont Street Casinos at 2 AM? Of course, the Fremont Street Experience, the City of Las Vegas, and the Casinos refuse to answer that question. If they did, they would have to admit that this happens nightly.

This is something we have been warning was going to happen for the last three years. The Fremont Street Experience, the City of Las Vegas, and Fremont Street Casinos are all well aware of the chaos that goes down nightly. From allowing teenagers to drink, do drugs, and assault tourists to the nightly rioting and mob fights, casino owners like Derek Stevens have been more concerned about pushing government-mandated vaccaines on their employees than protecting tourists from the gangs of mentally ill addicts who now roam Fremont Street.

Last November, we detailed how the city allowed these dangerous confrontations to happen on Fremont Street, even sponsoring child exploitation and meth addicts by allowing them to register with the city government to stand in assigned circles throughout Fremont Street.

After registering with the city of Las Vegas, drug addicts, criminals, panhandlers, and parents who force their three-year-old children to perform at 1 AM, are assigned a circle where they can pretend to perform. As a result, the entire Fremont Street Experience has become a hive of criminal activity and underage debauchery.

While the local media is refusing to talk about what’s really happening, refusing to acknowledge that Fremont Street and the Strip have been taken over by street gangs and thugs, the fact is people are being assaulted, robbed and even killed on the Las Vegas Strip and Fremont Street almost nightly.

Back in April, things started getting so bad on Fremont Street that we even had a drive by shooting near the El Cortez. Late last year we warned our readers that it was no longer safe to frequent Fremont Street, and warned that the City of Las Vegas and Nevada Democrats were purposely setting up deadly situations and allowing child exploitation on Fremont Street.