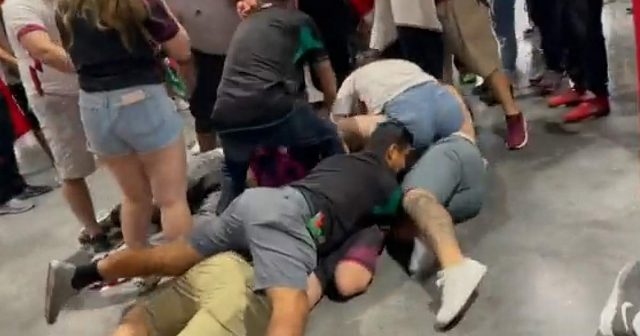 Over the weekend, Allegiant Stadium hosted a soccer match between the US and Mexico. By all accounts, the stadium has become a complete disaster that invites the worst of Las Vegas in for a night of fist fights and complete chaos.

Besides the usual bullshit you see from these soccer fans, tensions were pushed to the limits as 65,000 people had to walk over a mile to and from the stadium, because Clark County and Steve Sisolak never bothered to care if people actually had a place to park.

Dozens of fights reported throughout the stadium!

Another fight from Mexico vs USA Soccer match at Allegiant Stadium… pic.twitter.com/k5uReSpcWL

I guess this is why you pay extra for luxury VIP seating at Allegiant Stadium? pic.twitter.com/vu4PPBJ9Cx

More chaos from Allegiant Stadium over the weekend! Dozens of fights and assaults and not a word from Metro, Clark County Officials or anyone in the Local media! https://t.co/kClm7pbt7T pic.twitter.com/ffdsLUEN7E

Not only were many of our local politicians there who insist that the COVID pandemic is so dangerous we need a new round of mandates at the game, but they didn’t seem to care that about half of the place was mask free and none of them seem to be talking about the dozens of fights throughout the stadium. While we love that so many people decided to say fuck you to our local hypocrites like Clark County Commissioner Michael Naft, how this is being enforced by the County and the Governor yet again shows the whole thing is nothing but political theater.