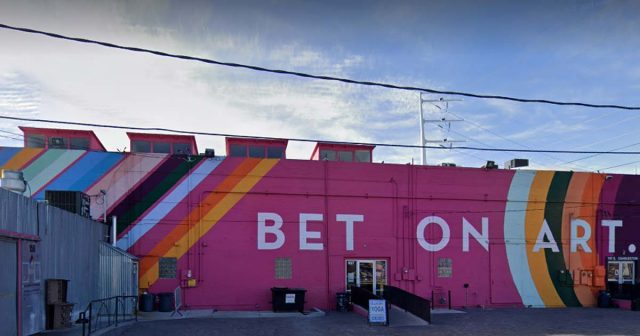 A failing art gallery inside of the Arts Factory in Las Vegas is requiring Proof of Vaccination in what looks like another publicity stunt staged by our local media to push mandatory vaccinations.

Earlier today, FOX5 ran a story, claiming how Daniella Etel Courban, a so-called “retired doctor” ( a gynecologist) is requiring vaccinations to enter her Open Art Las Vegas gallery at 107 E Charleston Blvd. It was then pushed out by the usual paid “locally” twitter accounts who help spread Sisolak’s propaganda.

It’s all a staged story by the local media to promote mandatory vaccinations!

What the “locally” twitter account, FOX 5, and our other outstanding local media outlets don’t tell you is the whole story is a publicity stunt to shame other business owners into requiring proof of vaccination.

What they are trying to do here is obvious, they are attempting to make this into a story because the lady was supposedly a doctor — I mean if a doctor is doing this it must be serious, right? Well, once you start looking into the story the whole thing quickly falls apart.

What they don’t tell you is that this super smart medical expert is running a failing gallery, a gallery that is only open SIX hours a week in an OPEN-AIR building where none of the other gallery owners are requiring the vaccination. It’s literally in a warehouse, with open ceilings!

Isn’t it funny how none of the stories run by FOX5 or our local media mention that this is inside of an open air gallery with dozens of other businesses — it isn’t like she has her own closed off building or store! And why don’t they mention that it is a failing business that is only open 6 hours a week. Well, that’s because if they actually showed it to you, you would realize that this doctor is either a moron with no actual medical credentials, or the story is pure propaganda — we suspect both!

I mean, does the good “doctor” and Fox 5 really think that requiring vaccinations in an open air studio does anything. Just check out the picture below, these studios are in a large warehouse with false walls that do not even extend to the ceiling — maybe there is a magic COVID forcefield we can’t see!

Remember, 99% of what our local media reports are lies, copy and pasted AP & Reuters propaganda, and carefully crafted press releases from the Governor’s office, the Clark County Commissions and the Casinos. They are not journalists, they are paid propagandists!

They are Propagandists… Did a single one of them report any of these recent stories???