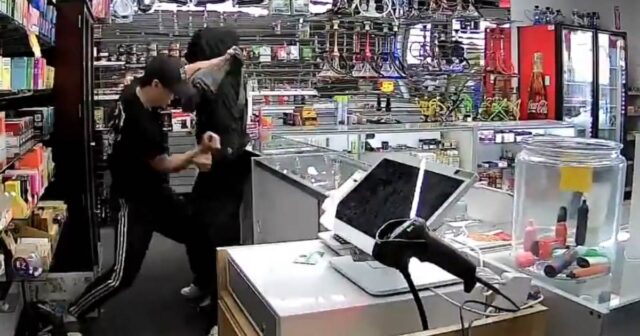 On Tuesday, around 3:30 p.m., a robbery was reported at the Smokestrom Smoke Shop near the 4500 block of West Sahara Avenue. Police are investigating the incident but so far have released no information on what happened.

Our sources tell us that three men attempted to rob the store, and store owner Johnny Nguyen grabbed one after jumping the counter and started stabbing him multiple times. Additionally, our sources tell us that a video released this morning from Andy Ngô on Twitter shows security footage of the robbery and the stabbing.

A robber in black bloc was stabbed & subdued by an Asian-American shop keeper wearing flip flops in Las Vegas this week. The robber’s accomplice leaves his friend behind. Police are investigating the robbery & stabbing. pic.twitter.com/EJrF6syO1d

Vegas has become a Warzone!

While the media has attempted to bury this story, after all you wouldn’t want the public knowing they can fight back, these types of robberies have now become a daily occurrence in Las Vegas.

Las Vegas has become a downright dangerous place to be. From the shootings on Fremont Street to the No-Go Zones taken over by gangs and homeless addicts on the strip, our local media and our local leaders seem unwilling to do anything to address what’s really going on.