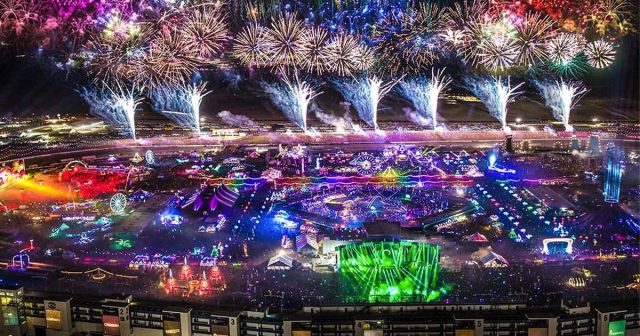 The Electric Daisy Carnival, a festival that is notorious for allowing open drug use, having mass-drug overdose hospitalizations, and yearly deaths at their festival announced today that they will require proof of vaccination or a negative COVID test to be admitted into their annual outdoor drug fest at the Las Vegas Motor Speedway in October.

But don’t worry Drug Addicts, you will still be able to take your Molly, Heroin, and Fentanyl into the show so that you can proudly overdose and overwhelm our hospital systems with your stupidity!

Isn’t it ironic that a show designed for drug addicts and anonymous sex is now pretending to care about your health and safety?

Health and Safety? EDC Deaths, Tens of Thousands of Drug-induced Medical Events, and Overdoses since it Started!

Isn’t it odd how the event organizers and the morons on the Clark County Commission are requiring proof of vaccination, but don’t seem to care about the people who will overdose and overwhelm the hospital system at this year’s show?

Since the festival started, multiple people have died as a result of drug-related events during the festival, some as young as 15-years old. And every year, over 1,000 people require medical attention at the show – most drug-related. Back in 2017, The LA Times linked multiple deaths directly to Insomniac events.

But somehow that Clark County Commissioners, the event organizers Insomniac, and founder Pasquale Rotella don’t seem to care about those “health hazards” and deaths!

What about other medical screenings? I mean this is about health and safety, right?

In 2017,  Terry and Gayline Tom, sued Insomniac Holdings and Live Nation Entertainment alleging what politicians and the Clark County Commission have known for decades, the organizers of EDC and the ticketing company are not only negligent in running their festivals, but they know people are going to overdose, have life long medical problems, and die as a result of their events.

Terry and Gayline Tom’s son, a UC Irvine graduate, died of an MDMA overdose at the 2015 EDC festival at the Las Vegas Motor Speedway. His parents claim the medical tent was empty, and their son was left laying on the floor without medical attention for an hour. That year more than 1,400 medical calls were requested and more than two dozen people were taken to the hospital, according to the lawsuit.

It’s well known that a large number of very young teenage girls attend EDC and Insomniac events. The company does virtually nothing to stop it. Sadly, every year these girls overdose, are raped, and some have even died at EDC, including 15-year-old Sasha Rodriguez who died of an ecstasy overdose.

The event has been described by industry insiders as “one giant nursery designed to babysit teenagers for three days.” In fact, it’s been a well-known “Secret” that the event was filled with drugged-up underage kids since the event started years ago in Los Angeles. Back in 2011, The Los Angeles Times reported that EDC was selling liquor to teenagers. When the deaths, underage drinking, and teenage drug use at EDC were exposed, organizers quickly moved the festival to Las Vegas, where they’ve gone virtually unchecked by our local media.

Editors Comments: We have zero problems with EDC being held in Las Vegas, grown adults should be able to do what they want and make up their own minds on what risky behaviors they choose to partake in; what we do have a problem with is hypocrisy!