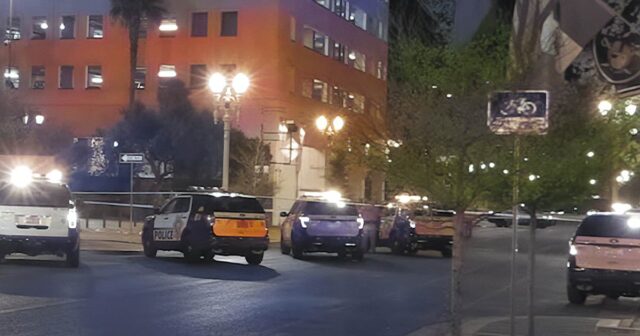 In the latest incident of violence to plague our city, two people were shot around 3 AM Saturday in front of the El Cortez after a truck drove by and started firing toward a group near the Casino

Las Vegas Metropolitan Police say two people were walking near the El Cortez when they were both shot at from inside a vehicle, whose occupants fired off several rounds near the 600 block of Fremont St.

Both victims were transported to local hospitals with non-life-threatening injuries.

No details or descriptions on the shooters or the victims have been released, other than the victims were male and female. LVMPD did say they were looking for a truck last seen towards Clark Avenue and 6th Street.

The incident came just hours after El Cortez announced they were transitioning to become a 21 years of age and over-only property, a move our sources say was meant to try to discourage ghetto thugs and homeless addicts from being able to enter the casino without passing through security checkpoints. Once fully implemented, the new policy will have identification checks at every entrance.

Things are getting so bad here in Las Vegas, that many of the high rollers and visitors who frequented our city have started to look elsewhere. In fact, as we reported yesterday, several celebrities and record company executives choose to skip tonight’s Grammy Awards because of what Las Vegas has turned into under Steve Sisolak and Joe Lombardo’s leadership.

Just this last week, the scumbags in our local media tried making excuses for a homeless killer, trying to turn him into some sort of victim. In reality, and as we exposed, another tourist was killed by a homeless meth addict who had already stabbed two other people in the last year and was let back out on the streets by a Democrat-run system that favors criminals over hard-working people.

Last month, we had a mass shooting inside an illegal, black-only nightclub. The shooter was a 9-time felon, with 82 prior arrests who was somehow let back out on the streets of Las Vegas to kill and create more chaos.

But these are just the latest in a long string of attacks inside and around Las Vegas Casinos. Over the last couple of months, we’ve had a shooting inside Downtown Grand, a mass shooting at an illegal blacks-only club, a murder inside the Rio, a shooting inside Bally’s, a housekeeper killed at Bally’s, a man beaten almost to death for not wearing a mask inside a Las Vegas store, a man stabbed by a homeless man inside the Paris Casino, a man shot 11 times by a homeless addict in Chinatown, and countless assaults inside Casinos and throughout Las Vegas.