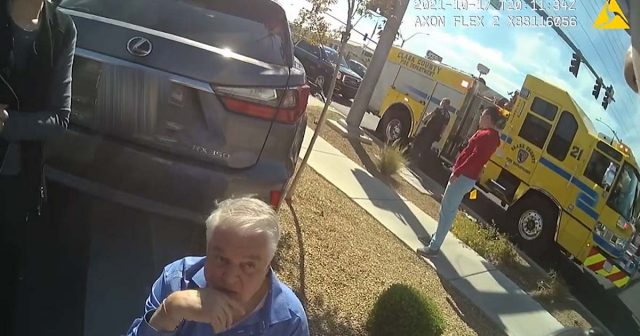 Last week we reported on how Governor Steve Sisolak was involved in an accident in Las Vegas, and appeared to be given special treatment by Las Vegas Metro police who failed to do a field sobriety test on the Governor, who witnesses claimed appeared intoxicated.

Today, partial police camera footage was released, and it appears the rumors may have been true.

The footage shows what appears to us to be a highly intoxicated governor, being given special treatment by Las Vegas Metro officers. In the video the governor comments, this is going to be a media circus, before police allowed him to be removed from the scene by his wife and his handlers who oddly argue against sending the governor to the hospital.

Governor looks to be the one who was drunk… why was no DUI test given to him? Why are they reluctant to take him to hospital? Why is @davidcharns and @8NewsNow yet again running interference? pic.twitter.com/s4jkJIDI3B

The governor was found at fault for the two-car crash near Rainbow Boulevard and Russell Road, yet no field sobriety test was given to him, despite appearing intoxicated?

If he was injured in the video, why put up a fight about taking him to the hospital, unless you are trying to hide something?

Was Evidence removed from the Governor’s Vehicle?

In the video, there is a moment when the police officer turns to the vehicle and Sisolak’s handler can be seen removing something from the back seat. His wife immediately jumps in, saying oh, he was just moving, can we remove some garbage.

Why did the police allow his handler and wife to remove evidence from the vehicle, claiming she just had to “remove some garbage”? It sure looks like she was covering for the handler who was about to be caught removing evidence!

On top of appearing drunk, Why was the Governor Sisolak’s handler & wife allowed to remove evidence from vehicle, claiming they had to remove “garbage” — would that be your first worry after an accident, unless that garbage was open liquor or drugs!https://t.co/bfFOJNRWFp pic.twitter.com/YguzHqd1zo