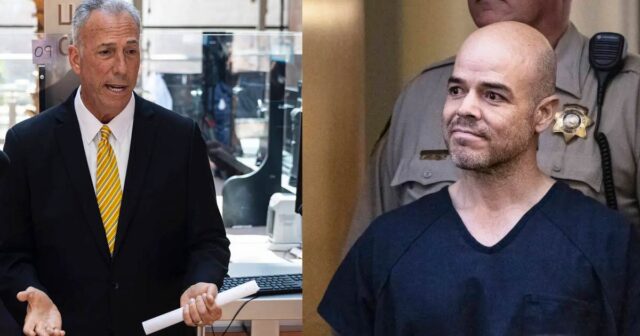 Today, we have learned that Robert Telles, The Clark County democrat who killed a reporter earlier in the month, had a violent past that included domestic violence while in public office. Unfortunately, our soft-on-crime Clark County District Attorney Steve Wolfson again let a killer off the hook.

According to Las Vegas Municipal Court records, Telles was arrested after beating his wife back in February 2020. During the arrest, Telles resisted officers, which added the charge of resisting a public officer. That’s when the democrat party steps in to help!

His attorney, Ross Goodman, son of Las Vegas Mayors Carolyn and Oscar Goodman, made a deal with Steve Wolfson’s office that allowed his client to get out of the domestic violence charge and receive a suspended jail sentence for the resisting arrest charge.

Even after Democrats on the Clark County Commission found out that Telles was beating his wife and having affairs with County employees, they helped cover the whole ordeal up and ensured it would never hit the local Las Vegas news. In fact, the local media just now released the video of the arrest, after sitting on the story for over 2 year in order to protect the Democrat party!

Keep in mind @8NewsNow & Democrat activist posing as a reporter @davidcharns sat on this for 2 years to protect Democrats! pic.twitter.com/G4OxDJtD71

Not only was the violence covered up by local democrats, but as we reported earlier in the week, Governor Steve Sisolak, who denied knowing Telles, actually appointed him to a board that steals over 93 million Clark County homeowner taxpayer dollars a year.

Wolfson has long history of being soft on crime!

Unfortunately, as we have covered numerous times in the past, our Democrat District Attorney Steve Wolfson seems to love letting criminals loose in Las Vegas. Most recently, he dismissed Charges Against Basketball Star who Killed a Man while driving under the influence, allowed a black mass shooter with nine previous felonies, and 82 arrests to  plea bargain a murder and mass shooting down to only 21 months in jail, and allowed a 16-Year Old Violent Gang Member with Prior Felony Charges to be let back on the streets – he then shot up Fremont Street and killed a tourist.

Steve Wolfson told reporters today that “it’s too early to say whether his office will seek the death penalty” in the Telles case.

Robert Telles Still being Paid 130,000 salary while behind bars!

Despite sitting in a jail cell, we have learned that Telles is still being paid his salary. In fact, Democratic Clark County Commissioner (and local drug pusher) Tick Segerblom told reporters ” he’s still an elected officer and he’ll get paid while he’s in jail.”

Remember, this is the same County Commissioner that was perfectly fine passing resolutions banning unvaccinated people from working and making a living! So it looks like the Democrats on the County Commission are fine taking away your salary if you didn’t take the magic shot, but oddly against taking it from murdering, wife beating democrats!

How much longer will We The People allow this? pic.twitter.com/1NWhjz2cux