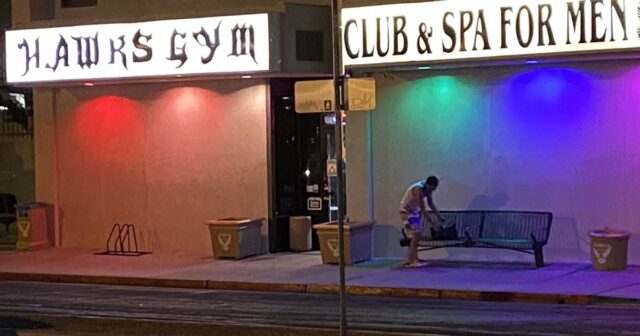 Today, news broke that the current Monkeypox scare started in gay bathhouses overseas, making most rational people wonder, that if we shut down our entire economy over a cold, why are Democrats not demanding the immediate shutdown of all Gay Bathhouses and sex clubs?

Governor Sisolak, who ruthlessly targeted small business owners and bars during the COVID shutdowns, has failed to say a word about the next media pandemic scare – Monkeypox. But, of course, doing so would immediately draw attention to the numerous gay sex clubs he allowed to operate throughout Las Vegas during the COVID crisis.

As we covered during the shutdowns, as other businesses were forced to close their doors, Sisolak and the Clark County Commission allowed Gay sex clubs to continue their illegal operations without ever forcing them to close.

While the mainstream media will quickly bury this, today we have learned that the current Monkeypox outbreak has been linked to Men having sex with other Men at Gay bathhouses in Spain and a Gay Pride festival in Gran Canaria.

Among the 30 or so diagnosed in Madrid, there are several who attended the so-called gay pride festival — Darklands 2022 — in Gran Canaria; although it is not yet possible to know if one of them is patient zero of this outbreak or if they all got infected there,’ a health source told El País. While the media is already trying to spin the story — because you can’t offend the protected degenerates in the LQBGXYZ community — Madrid authorities have been working on tracing the cases mainly from a single outbreak in a gay bathhouse, regional health chief Enrique Ruiz Escudero told reporters on Friday.

It’s believed that it then spread via the “pride parade.” The festival featured nightly parties for men to have sex with other men and animals. The event hosted fetish camps for people who have sex with animals, one called Horse Fair and the other Camp K9

Twenty cases have been detected in Britain – where authorities are offering a smallpox vaccine to healthcare workers and others who may have been exposed. The UK Health Security Agency has said a notable proportion of recent cases in Britain and Europe have been found in gay and bisexual men.

Professor Sir Peter Horby, director of the Pandemic Sciences Institute at Oxford University, ‘It would appear that there is some element of sexual transmission perhaps with just the very close contact between people and the skin lesions, because a large proportion of the current cases are being detected in gay and bisexual men.” He warned that the “important thing is that we interrupt transmission and this doesn’t become established in the human population”

But just like the AIDS outbreak in the 80’s, it seems most politicians are unwilling to let the public know where and how this started, or to close down the places where it is spreading — so just like AIDS, if Monkeypox does spread it will be because our government officials yet again played politics with your health. They’re already trying to push another magic shot, that somehow was ready to go even before this so-called outbreak, instead of telling people what the source is and to AVOID these risky behaviors!

Local Media trying to pretend this is the next pandemic

While all of the local Las Vegas media is hyping this as the next pandemic, in London where there is the largest spread, the STD clinics are all admitting that this is a virus being spread by gay men.