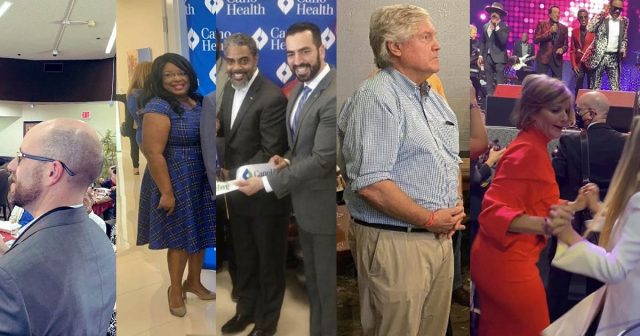 Over the last couple of days, we have started to expose the utter hypocrisy of the continuing freedom business-killing mandates, and how the same democrats who demand your compliance don’t actually follow the mandates themselves. In fact, we have caught numerous prominent Nevada democrats at parties, casinos, and indoor events throughout Las Vegas where they refused to wear the same masks they expect you to wear forever!

After a week of thrashing the National Finals Rodeo, sending out OSHA mobsters to try to shut down and scare vendors, and using Las Vegas Metropolitan police saturation polls to intimidate cowboys into wearing masks, we thought it was about time to expose these democrat tyrants and their mask scam.

One of the chief democrats on the Las Vegas City Council and outspoken mask tyrant, Coucilman Brian Knudsen has been instrumental in imposing mask mandates on City of Las Vegas Business owners. But the hypocrite who spends his time pushing mask and vaccine mandates doesn’t seem to actually believe they work, since we’ve caught him on numerous occasions violating his own mandates.

Why again are you listening to these hypocrites? pic.twitter.com/E8MHd8hWE3

Laura Perkins is one of the Nevada System of Higher Education University Regents who pushed for mandatory vaccines for college students and mandatory masks at all Nevada Colleges. One would think that a woman who has fought to muzzle college students indefinitely would never leave her home without her mask, well apparently she has no problem attending hospital grand openings, masksless in a room full of MASKLESS DOCTORS! Odd, if masks work, why are these doctors not wearing them?

Yep, that was Democrat Congressman Steven Horsford, hanging out maskfree with Laura and other so-called healthcare professional, none of whom seemed to concerned about the lack of masks.

Here he is again, from the same event…

Hey is that @ClarkCountyNV commissioner @CommishMcCurdy team and Democrat @StevenHorsford maskless with maskless doctors at the opening of @iamcanohealth in Las Vegas?

Seems odd the the people who push the mandates and doctors don’t seem concerned…. unless… pic.twitter.com/UM2ph3SLvZ

Funny how he is the only one in the photo-op OUTSIDE, but inside he violates the mandate while forcing the "servants" to wear them!

Clark County Commissioner Justin #GetTheVax Jones — seriously that’s what the clown calls himself online, voted to not only impose mask mandates on the public, but argued that people should not be able to work in Clark County without vaccine passports.

He sure does seem super scared of that whole pandemic thing, right? WRONG!

As we pointed out yesterday, Jones refuses to wear masks when speaking to his constituents, and ignores his own mandates at Galas and events inside Las Vegas Casinos. Here he is last week at the Paris.

Why does @JustinJonesNV believe he’s above the people? If the people who passed the mandates don’t follow them, why is the rest of the county? pic.twitter.com/TznNIWNRC7

This has got to be one of the worst and most corrupt figures on the Clark County Commission. While Tick spends his time arguing for lifelong mask mandates and forcing employers to fire anyone who isn’t vaccinated, in his freetime he can be found downtown Las Vegas, wandering around high off his ass, shoeless, and of course maskless. In fact, just days after passing the mask mandate he started throwing maskless pub crawls downtown.

If Tick Segerblom & the democrats who push the mandates don’t follow them, why are you? pic.twitter.com/PraWVd6mH7

Another Democrat loud mouth who won’t shut up about masks and vaccine mandates, Fabian apparently believes he himself is above the mandates as well. Here he is without a mask at the Democrat Asian Gala in early December.

What an inspiring event, enjoyed my time tonight at the #InspirAsian2021 Gala hosted by the wonderful staff of @ACDCNV.

The community health center established by ACDC will push the bounds of health equity and language access, thankful to be a part of this moment. pic.twitter.com/SqpFVjqZrk

Appointed by our criminal governor, Naft has spent his time on the Clark County commission doing the governor’s bidding. While Naft demands that you wear your mask like a good subject, he apparently has no problem openly ignoring the mandate himself.

If this clown expects you to wear your mask all day at work, why does he think it’s okay to remove it while on television or the radio? Why does he give a pass to all the local media? Does COVID know not to infect people when they are in the studio?

They are openly mocking you!!!

Yet another Clark County Commissioner proudly ignoring the indoor mask mandate that he expects you to follow at your workplace!

Last year Senator Rosen couldn’t stop telling Nevadans that wearing a mask was their patriotic duty — apparently it wasn’t hers! Here she is violating the mask mandate at a party inside the Cosmopolitan on 9/11/2021.

Yep, that’s also Democrat Congresswoman Susan Lee hanging out maskless at the Cosmopolitan in September, in full violation of the mask mandate.

Keep in mind, it’s easy for Rep. Susie Lee of Nevada to cheer for the Sisolak Mandates and Shutdowns, while not being affected by them in the slightest. She has assets worth $35,712,000, has 17 homes, private jets, and her ex-husband’s Casino Company, Full House Resorts, stole $5.6 million in COVID Funds!

And here she is again last month, yet again violating the Nevada Mask mandate that her and her democrat party expects you to follow, at a Gala for K.T. Lim, a Chinese-Malaysian billionaire.

The event, which was held at Resorts World in October, forced staff to wear masks while celebrities and democrat lawmakers partied their asses off all night without them. To add insult to injury, Resorts World has some of the most draconian health mandates on the strip, forcing all new hires to take the experimental COVID shots to maintain employment and even segregating unvaccinated employees.

Apparently Congresswoman Titus thinks she is exempt from the mandate as well. Here she is speaking, mask-free, to a crowd of masked democrat sheep who were forced to wear the compliance masks while listening to the queen go speak!

Hey @repdinatitus where does your parties mandate say you get to go mask free while the serfs in the crowd have to mask up?https://t.co/TtwYXXgfbb pic.twitter.com/377atKY9Xp

And here she is with fellow democrat Clark County District Attorney Steve Wolfson, Shelley Berkley, and Clark County Commissioner Jim Gibson hanging out in Henderson on December 18th, 2021 without masks, yet again violating her own party’s indoor mask mandate!

When she’s not helping her drunk husband hide evidence from police, First Lady Kathy Sisolak is out there partying it up maskless. Here she is at the InspirAsian gala earlier this month where dozens of high-ranking Nevada Democrats gathered to party at the Paris Casino, while ignoring her husband’s mask mandates!

Guess she doesn’t follow the @GovSisolak masks mandates either! Why are you still taking these people seriously???https://t.co/TtwYXXgfbb pic.twitter.com/vOR9TEJQO5

Why are you still wearing masks? We’ve been telling you since this started, the very people that are imposing these mandates openly mock you among their elite friends.