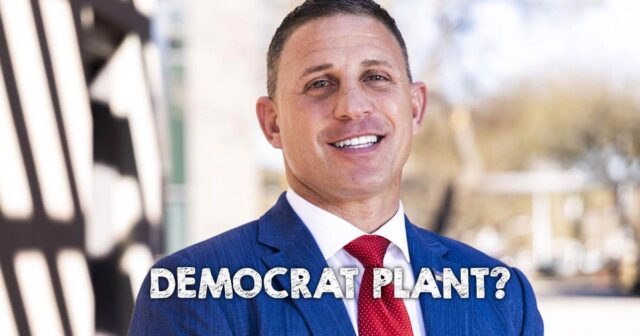 After exposing Joey Gilbert as a Democrat asset who worked for years to help elect the same democrats and socialists who enacted the mask and vaccine mandates into office, we thought we were done exposing the drug-addicted grifter. But this morning, we started seeing tons of online ads for Joey Gilbert, Ads that a democrat front group is running to cause chaos in the Republican Primaries.

The Democrat group, posing as a conservative pact, is called the Patriot Freedom Fund. The Nevada Independent exposed the group earlier in the year as a front group for the democrat party. As a result, the Republican National Committee sent the group a cease and desist letter to a political action committee accused of meddling in the Republican gubernatorial primary.

According to the nevadaindependent.com, The PAC’s only listed officer is Truman Fleming, a Las Vegas-based real estate agent linked to Democratic Assemblywoman Sandra Jauregui — a prominent gun control advocate. The state Republican Party has urged voters to ignore messaging from Patriot Freedom Fund.

Over the last week, the Democrat front group – which our sources say is working directly with the Gilbert campaign – began running radio and internet ads, and even set up a website to help promote Joey Gilbert.

Why Would Democrats help Joey Gilbert?

As we’ve pointed out numerous times in the past, Joey Gilbert is a wolf in sheep’s clothing. The longtime Democrat fundraiser, a guy who literally gave money to socialists in Clark County, somehow managed to trick people into believing he was a conservative – despite running a law firm that floods Nevada with illegal aliens and has been caught tipping off illegals to coming ICE raids on numerous occasions.

Did you know Joey Gilbert fought the Trump administration’s attempt to stop DACA?

In the next video, one of his employees admits they are helping illegals avoid ICE capture and actually tells them about coming raids.

Hey look it’s that time Joey Gilbert — the guy who claims he’s gonna stop asylum seekers in Nevada while helping them flood in— had his @joeygilbertinc law firm try to tip illegals off to coming ICE raids so they could avoid capture!!! pic.twitter.com/ReTjZIFDCR

While Gilbert has managed to trick some into believing he is some diehard MAGA conservative, the fact is he is a democrat activist who figured out pretending to be against masks and showing up at rallies could help him throw the Republican primaries into chaos. And of course, make a little money grifting on the way!

Earlier in the year, Gilbert was forced to respond to our reporting, which was the first to expose his ties to democrats. Of course, he tried to make excusing and pretended he was funneling money to drug-addicted socialists like Clark County Commissioner Tick Segerblom to help legalize marijuana.

You heard that right! Joey Gilbert actually helped elect the Clark County commissioner who helped instate the mask and vaccine mandates that he pretends to be against – oh wait, you didn’t know he forced his own employees to wear masks?

But don’t take our word for it; we have the receipts!

According to campaign filings for the radical, convicted criminal and Democrat Attorney General for Nevada, Aaron Ford, Joey Gilbert was a campaign contributor on at least 3 different occasions.

While Gilbert makes ads denouncing Communism and Socialism, it didn’t stop him from donating to democrat socialist and one of the people who voted for the mask mandate, Clark County Commissioner Richard “Tick” Segerblom.

Gilbert not only donated to democrats and socialists, he literally threw them expensive fundraisers to help them get elected.

No wonder @joeygilbertinc purged his old twitter posts — guess on top of fighting for Asylum seekers and donating to Socialists and the Criminal Aaron Ford, Joey Gilbert was throwing campaign donation fundraisers for democrats as well — OOOPS!!!https://t.co/1R8Xfj6tcR pic.twitter.com/odMwbumRiL

Wonder why Gilbert would support a drug addict like Tick Segerblom?

Joey Gilbert has financial interests in over 80 dispensaries in Nevada. He has openly admitted that his support for Tick Segerblom was all about legalizing the drug. Gilbert was a founding member of the Board of Directors of the Nevada Cannabis Industry Association and a member of the NORML Legal Committee.

Here you have a guy who is willing to sell out his state so he can do more drugs and financially benefit from flooding our state with potheads. Just take a walk down the strip, the constant pot smoke and crime can be directly attributed to Gilbert and Tick Segerblom, both of whom wanted to be legal drug dealers and sold you out to do just that!

Gilbert, despite claiming he had no idea that Segerblom was a socialist when he donated to his campaign, has a long history with Tick, and even helped him draft a bill, SB 236, to make Vegas a haven for drug addicts.

Mr. Gilbert, along with his partner of 20+ years, Clint Cates, licensed and built one of Nevada’s premiere Cultivation and Production Establishments, CANNAVATIVE, resulting in one of Nevada’s first operationally successful cannabis companies in the state. Later he helped license and build Reno’s only Dispensary in the Downtown Entertainment District, MYNT voted as the best dispensary in Reno.

But again, don’t take our word for it, we have the proof. Just head on over to the Parliament group where he is listed as the Director of Governmental Affairs of MYNT Cannabis Dispensary. And in case, like his law firm, they delete the page here is the screenshot…

Here he is at one of the dispensaries that he owns with his democrat buddies — his campaign is desperate to scrub these videos from the internet — good thing we found them first!

Gilbert has a long history of helping democrats and RINOS get elected. In fact, he doesn’t want you to know it but he supported the largest tax increase in Nevada history that was signed by RINO Governor Brian Sandoval in 2015. Michelle Fiori called out Joey Gilbert in the Governors Debate on February 8 for his support of the 2015 Gross Receipts Tax. Joey called Michelle, a “nut job” for her opposition to the tax.

While on stage at the debate, he admitted he supported the tax because Brian Sandoval was his Fraternity Brother. Good to know Mr. MAGA has no actual spine!

And back to his drug dealing… In 2017, Gilbert admits in a RENO 2NEWs interview that his Frat Buddy, then Governor Sandoval, was helping him push an emergency measure that would help him push more drugs in Nevada.

He told the news channel, “At Mynt Cannabis they say they’re doing close to 11 times their previous amount of sales. They’re hoping that this emergency measure will come through, so they can keep on selling. “It’s absolutely ridiculous that we are waiting to bring product from our own warehouses and we can’t do it because of this distribution issue. So the governor is stepping in for us and I think he’s going to get it done,” says Joey Gilbert.”

Of course none of it was ever about legalizing pot; otherwise he would have fought to allow people to legally grow it at their own homes — it was always about enriching himself at the expense of actual Nevadans.

But what about the court cases he says he won against the mask mandates?

Another Lie! Gilbert litigated nothing. He filed a court case with Sigal Chattah. He did not plead these cases. They lost, and now the parents are on the hook for legal fees.

But what about the Anti-Mask Rallies?

We were at the rallies, we covered the protests – Gilbert HAD NOTHING TO DO WITH THE RALLIES. The guy showed up in 110-degree heat, dressed in a full suit like a moron, and walked towards the back pretending he had something to do with it so he could post pictures on Instagram and claim he organized it.

He then began showing up with a megaphone, started walking in the middle of the crowds, pretending he was the organizer – HE WAS NOT! The guy is a grifter playing a part. He is a democrat plant. The same city-slicker who wore the heavy blue suit in 110-degree Vegas heat, now shows up to rural gun shows in freshly purchased cowboy boots, the big belt buckle, and the new costume that he believes will convince the rural folk to vote for him in the primaries. This is how dumb they think you are!