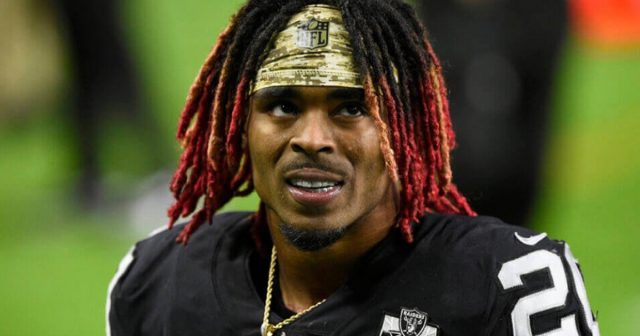 In the latest abuse of power, and an attempt by Las Vegas officials to restore the image of one of the most criminal teams in the NFL, the same Clark County District Attorney who let a 9-time felon with 82 arrests back on the streets so he could shoot up a black-only club in Las Vegas, has now dropped all charges against former Raider Damon Arnette.

Arnette was accused of pulling a gun on a valet attendant at Park MGM on the Las Vegas Strip in early February. Las Vegas Metro police arrested Arnette on charges of carrying a concealed weapon without a permit, assault with a deadly weapon, and two drug charges. Police reports say Arnette freaked out after the attendant asked him for his valet ticket. The Park MGM employee claims he heard a gun cock, and when he looked up, Arnette was pointing the firearm at him, and again demanded his car.

Police say they viewed surveillance video from the Park MGM casino and the video shows Arnette “took a handgun that was concealed from his pants and placed it in the drivers side interior door.” The argument continued, and LVMPD says “Arnette then appears to reach down and charge his pistol using both hands.”

Las Vegas Metro say that when they located Arnette driving a black G-Wagon shortly after on Las Vegas Blvd they located two guns in the car, 13.5 ounces of marijuana in the car, and 3 baggies of cocaine in his pocket. One of the weapons was found on a passenger (a Glock 36), and the other was found next to where Damon was seated.

According to court records, Arnette faced five felony charges, including assault and drug charges. He is now free to commit event more crimes! In fact, just hours before his charges were dropped he was arrested in Florida on cocaine charges and driving on a suspended license.

Not his First Las Vegas Crime!

According to our sources, Arnette was let off the hook by law enforcement multiple times before the Park MGM incident. In fact, Arnette was sued in a hit-and-run crash that occurred on Oct. 14, 2020, in Henderson. The woman he hit clams that he swerved at around 65 MPH into the Raider’s practice facility. She says he then “illegally left the scene of the crash” and Raiders officials then covered for him. Police claim that someone on the scene tried to take the fall for the NFL player.

He was also sued for another altercation with a valet at Aria Resort & Casino. In the Aria incident, Aria valet Sonny Flores claims that Arnette spit at him, repeatedly poked him in the chest, and verbally abused him when he refused to retrieve Arnette’s car without a valet ticket.

Arnette was released by the Raiders in November 2021, after social media videos appeared online of the ex-Raiders player brandishing three different guns and threatening to kill people. In the video, Arnette pointed guns at the camera and wildly threatened, “I swear to God I will kill you, Nigga, On everything I love, I will kill you Nigga.  You talking crazy.” Arnette repeated several more times in the video that he would “real deal kill you, my Nigga.”

Before being picked up by the Raiders, management knew of the potential trouble. In fact, management admitted that there were character concerns about Arnette when he entered the league, saying the club spent significant time trying to understand his behavior.

In his first year in the NFL, Arnette crashed four rental cars within roughly a month.

“Yeah, there was significant concern. And most of the teams around the league were very aware of it,” Mayock replied. “We spent an awful lot of time trying to understand his behavior. And really what kind of tilted everything in the direction of ‘ok, let’s go ahead and draft him’ was that we knew that coaching staff pretty well, we knew what they had asked him to do his last year at Ohio State, they felt very strongly that they knew who we had on our staff and that we’d be able to work with this young man. And not only help him on the football field, but help him in his life. Obviously in hindsight we weren’t able to do it. I know a lot of people, including myself, we were all concerned about this. But we at the time thought it was an acceptable risk. But obviously it’s painful on all levels.”

“We found the risk acceptable after doing more homework on Arnette than anybody we’ve done in the years I’ve been here,” Mayock added. “And obviously we missed. And that is 100% on me.”