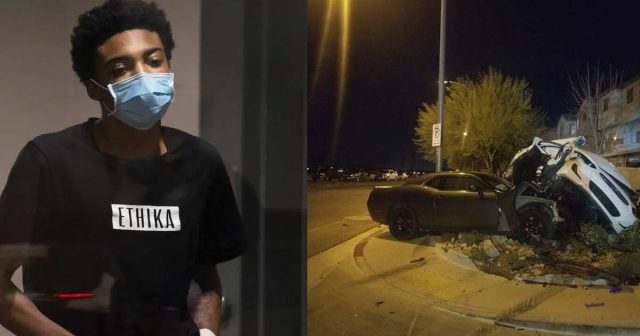 The Clark County District Attorney’s Office, led by democrat Steve Wolfson, dismissed an indictment against Bishop Gorman High School basketball star and former UNLV recruit Zaon Collins on Thursday. Collins was arrested on Dec. 30th of 2020 after he was involved in a deadly car accident while reportedly driving intoxicated and going 88 mph in a 35 mph zone.

According to a statement from Collins’ lawyers, the DA chose to dismiss the indictment. Collins had been charged with two felonies: DUI and reckless driving, both resulting in death.

This is Judge Joe Bonaventure. He let POS UNLV Recruit Basketball “Star” Zaon Collins out of jail with ZERO bail after he killed an Army Veteran while driving 88MPH in a 35, while high out of his mind. But don’t worry, according to Mr. Basketball’s POS lawyer, he was a good boy! pic.twitter.com/dZMXLMFhkG

According to the arrest report, Collins displayed signs of marijuana intoxication. Police also noted in the report that they found a “green leafy substance” inside a jar in his car.

Collins was reportedly driving 88 mph in a 35 mph zone at the time of the crash. Eric Echevarria, 52, died as a result of the crash.

At the time of his arrest, Wolfson’s office said in a statement that a blood test showed Collins had an amount of THC in his system at the time of the crash that exceeded the legal limit in Nevada. Yet, somehow the basketball star has yet again been let off the hook.

Several people in the Vegas basketball community say that like other talented athletes who have been given special treatment, Collins was rarely held accountable for his actions, including frequently being late to basketball practices and a penchant for careless driving.

Previous to the deadly accident, Las Vegas Justice Court records show Collins had already been cited four times for traffic violations, twice for exceeding the speed limit by more than 20 mph, once for driving the wrong way on a one-way street and another for a failure to pay full attention to driving.

“We have talked with the Collins family and have come to the mutual decision that it is in the best interest of everyone that Zaon focus on his other priorities and will not be joining our program,” UNLV Athletics said at the time. “It is a tragic situation, and our hearts and prayers go out to all that have been impacted.”