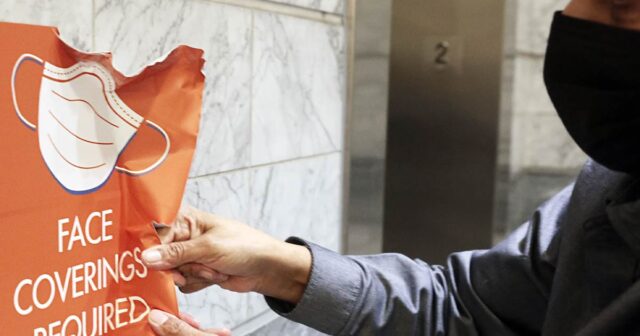 A federal judge in Florida on Monday vacated the Biden administration’s national COVID mask mandate for planes and other forms of public transportation, ruling that the Centers for Disease Control and Prevention had overstepped its authority.

U.S. District Judge Kathryn Kimball Mizelle said the CDC had failed to adequately explain its reasons for the mandate, and did not allow public comment in violation of federal procedures for issuing new rules.

Despite the ruling, and even after the Biden administration put out a statement saying the CDC mandate is no longer in effect and the TSA will not enforce it, the lying local Las Vegas media is still trying to trick the public into believing they need to wear them.

David Charns of 8News Now, the same reporter who made up fake stories about local hospitals being overrun with COVID patients, feverishly tweeted to his followers that they still needed to wear the masks inside Las Vegas airports.

A spokesperson for Las Vegas’ Reid International Airport said they have yet to receive anything official from the TSA, so masks are still required in the airport, for now. #8NN

The mask requirement for travelers was the target of months of lobbying from the airlines, which sought to kill it. The carriers argued that effective air filters on modern planes make transmission of the virus during a flight highly unlikely

In her 59-page ruling, Mizelle said the only remedy was to vacate the rule entirely across the country because it would be impossible to end it for the limited group of people who objected in the lawsuit.

The judge said “a limited remedy would be no remedy at all” and courts have full authority to make a decision such as this — even if the goals of the CDC in fighting the virus are laudable.

“Because our system does not permit agencies to act unlawfully even in pursuit of desirable ends, the court declares unlawful and vacates the mask mandate,” she wrote.