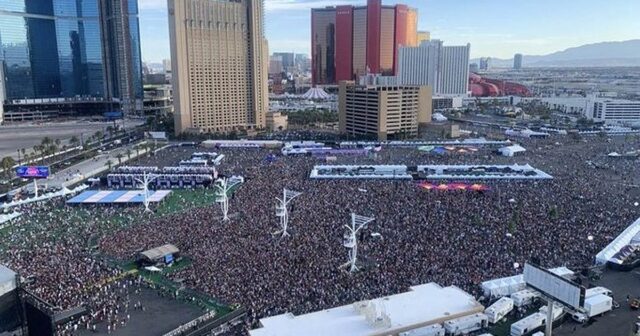 In the latest coverup, to protect the Ghetto hip-hop event earlier in the week, we have now confirmed that at least 1 person is dead as a result of the ‘Lovers and Friends’ Festival in Las Vegas. Over the weekend, we reported on the mass chaos, robberies, and shooting that Las Vegas Metropolitan Police still refuse to admit caused a stampede that injured hundreds of people.

But today, the Clark County coroner’s office admitted that at least one woman died during the event – they have refused to release further details on how the woman died. Jacqueline Torres Espinoza, 22, of Las Vegas was pronounced dead around 7:30 p.m. that day at Valley Hospital Medical Center, the coroner’s office said.

Our sources say that the woman was found having seizures while waiting for medical response teams that ignored her for hours.

As we reported over the weekend, the festival failed to do anything to set up cooling stations or shade in the 100-degree heat, even as hundreds of people collapsed due to heat stroke. Witnesses claim that the festival ran out of drinking water very early in the day, refused to allow people to bring water in, and started charging as much as 18$ for cups of ice.

Even before the reported shooting and stampede, people had already begun to flee the festival as stretchers could be seen carrying people out throughout the day. Festivalgoers who we talked to said they feared another Travis Scott Astroworld Festival style incident, after seeing security and medical personnel overwhelmed and people without tickets storming the gates.

A woman who attended the event told us she choose not to go back on Sunday after seeing a complete breakdown in order at the show. “People were passing out everywhere”, she told us, “There was no water, no shade, the asphalt was radiating the 100+ degree temperatures, and they started charging people with heat exhaustion $5 for a cup of ice. It was insanity, they should not be allowed to have shows there, it’s not a music venue it’s a death trap.” She told us. ” I saw stretchers going by me all day, they are not telling people the real story of what happened.”

She went on to describe the stampede at the end of the night, ” I was feeling pretty bad already and probably should have left, but my friends wanted to see Ludacris. Then we heard what sounds like gunfire, people started screaming bloody murder, and people just started running over each other trying to get away.”

Looting and Robberies at ‘Lovers and Friends’ Festival

A bartender who was working the event told us, “there were tons of robberies and no one was doing anything to stop these people from robbing us. People were just openly grabbing bottles of liquor from us, grabbing our tips and then when the fights started people just rushed the bars and started basically looting us.” “They were grabbing everything, bottles of liquor and our tip buckets.”

Other festivalgoers have taken to social media claiming there is a coverup of what really happened, because the festival was desperate to keep the festivities going. Others questioned why Metro and the county allowed the event to continue.

Everyone out here saying the shooting at the Lovers and Friends festival Saturday was a false alarm but while we was there Sunday sitting on the turf we seen empty shell casings #LoversAndFriendsFest #LoversAndFriends pic.twitter.com/pX2ZgAbcsq