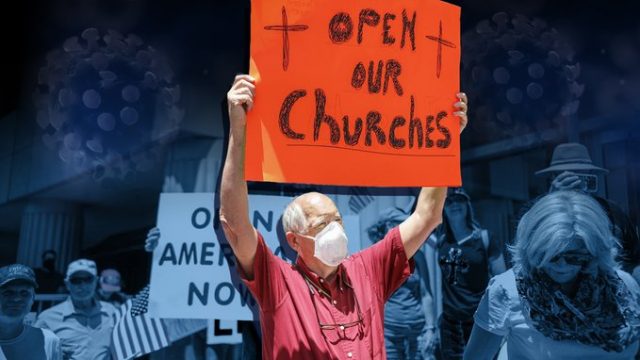 As large mega-churches throughout Las Vegas bow down in worship of the State, a number of smaller churches have openly defied King Sisolak’s edicts. One of those small churches won a victory for all of us today, one that can be used as a template for small business owners, bars and restaurants going forward!

The 9th U.S. Circuit Court of Appeals ruled Tuesday in favor of two Nevada churches that say the state’s COVID-19 restrictions violate their First Amendment rights because they place harsher attendance limits on Nevada’s houses of worship and religious gatherings than casinos and other secular businesses.

The Court of Appeals reversed an earlier federal court rulings that upheld Sisolak’s 50 people or 50% of the fire code occupancy worship services. The court instructed the district judges to preliminary enjoin Nevada from imposing attendance limits for churches stricter than those for other gatherings or businesses.

“The restrictions at issue here, by effectively barring many from attending religious services, strike at the very heart of the First Amendment’s guarantee of religious liberty,” a three-member appellate panel wrote in an 11-page opinion reversing the lower court ruling denying a preliminary injunction sought by Calvery Church in Las Vegas and another location in Dayton.

This welcome ruling comes as many Las Vegas churchgoers were starting to express major frustrations with their local churches who seemingly abandoned them and instead choose to side with the state.

Woke/Social Justice Mega-Churches like Canyon Ridge in Northwest Las Vegas, willingly went along with the Governor’s anti-Christian edicts, even going as far as closing their doors for 6+Months, pushing social justice and BLM propaganda, implementing mandatory registrations to attend church services, and implementing Mandatory Mask mandates of their own.

Woke Churches like @canyonridge have been biggest disappointment of the CCP Virus Lockdown Scam! Closing churches 6+Months, Mandatory Registration to Attend, Mandatory Masks – It’s like they’ve never opened a Bible! Hypocrites will be the First Pushing the MARK! Matthew 23:13 pic.twitter.com/7lh4WpTqnq

As Canyon Ridge “Christian Church” banned live public church services, they launched their COVID-19-friendly online church services so they could continue pushing SJW propaganda and collecting money from the flock they abandoned. They then started actively blocking and banning their own members from interacting with other members of the church on their social media channels.

The one positive note of all of this, is it exposed many of these woke churches for the heretics they really are!

At the time of this ruling, churches were subject to a hard cap of 50 people or 25% of capacity, whichever is less. All the while thousands of people can herd into Casinos, Walmart, Costco and Big Box stores throughout the city.

Sisolak, after crying about the ruling, again attempted to tell churches what to do:

Today, I issued the following statement in response to the Ninth Circuit reversal of a lower court ruling on the State’s restrictions on houses of worship. pic.twitter.com/Nn7P9oE2EH